Slivers are creatures that share a hive mind, which allows them to share their abilities with other nearby slivers. Cards with the creature type Sliver have an ability or characteristic that they share with other slivers. Early slivers share with all slivers in play, while later slivers only affect the player's own side of the board.

The creature type was introduced in Tempest. It was originally designed by Mike Elliott for the unpublished expansion Astral Ways. Slivers were inspired by the card Plague Rats from Alpha.[1]

The original Slivers were depicted with an armored vertebrate body, a long, bifurcated whip-like tail, one arm with a single talon for a hand, and a singular head with an armored crest. Variations on this appearance existed in accordance with the abilities each has to offer to the hive.[2][3] An evolved form has humanoid features.[4]

Volrath visited an as-yet-unidentified plane and discovered slivers. A fellow shapeshifter and an obsessive zoologist, he was so fascinated by these mesomorphic, hive-minded creatures that he brought the Sliver Queen to Rath.[5][6] He then took a number of her brood away from her (and stuck them in the Furnace of Rath) so he could study them.

Volrath is said to have genetically modified the slivers, but to what extent is also unknown. He attempted to create artificial slivers, but these were a poor approximation of the real thing and had no innate abilities to share with the hive. These Metallic Slivers were used to spy on the sliver hive.

Volrath used the hive to guard the Legacy and to attack Weatherlight and her crew on their quest to retake those artifacts and their captain, Sisay. Thanks to Hanna, who realized how the slivers' hive mind worked, the crew defeated them in the Furnace of Rath and Karn was able to convince the Sliver Queen to release the Legacy to him, arguing that the artifacts were as much a part of him as the slivers were a part of her.[7][8]

During the Rathi Overlay the slivers were transported to Urborg. Most of them were killed when they materialized in the heart of a volcano, and all the others were killed in the subsequent battles of the Invasion.

One hundred years later, wizards involved in the Riptide Project on Otaria discovered sliver fossils on their journeys and planned to bring them back to life in order to study them. The Riptide wizards did not know the importance of the Sliver Queen, however, and didn't recreate her. Without her, the slivers went rampant and overran the island housing the project.[9]

At the same time the Mirari was causing havoc all over Otaria. The magical waves it produced accelerated the slivers' growth, but it also lured them to the mainland since they confused its call with that of their deceased queen. Most of the slivers were therefore present at the battle at Sanctum and were killed in the magical explosion that created Karona. A small group of slivers survived, however, and fused into the ultimate manifestation of the hive mind, the Sliver Overlord.

After the apocalypse[edit | edit source] 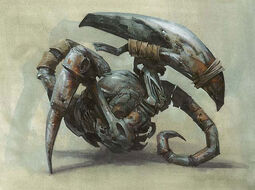 Slivers that survived the apocalypse caused by Karona's destruction and a few breeds that were "timeshifted" into the present by the violent upheavals of the time stream were among the few creatures that were able to flourish on the dying plane of Dominaria. As other species fought for survival in a world almost completely drained of mana, the slivers continued to multiply and mutate into new forms. Some of these new breeds mimicked traits of other life forms in the multiverse; the vampiric sliver fed upon the life essence of its prey and was strengthened in return, much like the dreaded Sengir clan and their ilk. The gemhide sliver adopted an ability similar to that of the fabled Birds of Paradise, creating mana of any color whenever it wished. Basal slivers possessed the innate drive to sacrifice themselves to provide for their nestmates, similar to the way the master breeders of the Ebon Hand used Basal Thrulls for their dark rituals. Another new strain present during this time was the shadow sliver, trapped between two worlds when the nest within the bowels of Volrath's Stronghold was overlaid on Urborg. Presumably, this breed was a terror to the Rathi Tribes who were also caught in the overlay in their home, the City of Traitors. Without the leadership of their Queen, these sliver swarms raged across the plane, largely unstoppable when gathered in great enough numbers. The destruction caused by the slivers was not necessarily malevolent, the hive-minded creatures only sought a new queen, new leadership to guide their numbers.

For a time, the planeswalkers Freyalise and Lord Windgrace maintained some control over the slivers in their respective realms. Once the Weaver King discovered the simplicity of their hivemind, he quickly took control of them for his own purposes and used them to wage war on their former masters. Since his destruction, the slivers are presumably once again without leadership, though it's indicated that the slivers' hivemind is slowly becoming sentient and self-aware, negating the further need for a Queen.

The Hivestone, a strange artifact discovered within the ruins of the Stronghold, was later found to have been used by the various evincars of Rath's past to control the seething sliver hive and its Queen. Upon its rediscovery, however, the device became a curse to its wielder, bending its possessor's will to the will of the swarm.

Slivers are implied to survive well into the future of Dominaria, taking on even more new and bizarre abilities. 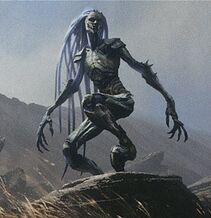 On the shores of the eastern Sea of Shandalar, an evolved race of slivers inhabits the "Skep", a great nest or hive. These slivers have gleaming, gemlike eyes and "hair" more like the squirming tentacles of a jellyfish or polyp. Many still have a bestial appearance, but a few can generously be considered humanoid. All are covered with chitinous plates that glisten and slide about like oiled pieces of machinery. The creatures use a chittered speech.[10]

The slivers on Shandalar are divided between the human-sized "less brood", with tails and singular claws, and "primes", which are bipedal and humanoid, resembling the sapient races of Shandalar. One sliver, the hivelord, rules over all slivers of the hive. The hivelord is around 20 times the size of a human.[11]

Slivers may also have appeared on Alara. The First Sliver, First Sliver's Chosen, and Dregscape Sliver have Cascade, Exalted and Unearth respectively, which are keywords from the Alara block. The Dregscape is also a location on Alara. These facts, however, do not outright prove that Slivers did appear but offer the possibility that they might have.

The Tempered Sliver seems to be located at Mirrodin/New Phyrexia.

Sliver is a creature type found in the Tempest block, the Onslaught block, the Time Spiral block, Magic 2014, Magic 2015 and Modern Horizons sets. Most Slivers have an ability that grants all Slivers the same ability. Exceptions to this rule include Metallic Sliver, Sliver Construct, Sliver Overlord, Sliver Queen, and Venser's Sliver.

Stronghold included another uncommon cycle and the rare Sliver Queen.

Scourge had only the legendary Sliver Overlord, which was printed in homage of Sliver Queen, a very popular card in casual Magic. Sliver Overlord was meant to be a "Sliver King" of sorts, but that does not fit with Sliver biology, so it instead became an overlord.[19] Like Sliver Queen, it shares both its 7/7 size and WUBRG cost. Its activated abilities represent its ability to call and control other Slivers, which can be used with other type-changing effects and abilities to take control of opponents' creatures.

Another three years later Time Spiral added 26 new Slivers, as well as reprinting Essence Sliver and Spined Sliver as "Timeshifted" cards. The set included two commons, one uncommon, and one rare of each color; one uncommon for each of the allied color combinations, and one artifact Sliver.

Future Sight had one cycle, one legendary sliver, and two cards that referred to slivers:

Six years later, Slivers once again returned in Magic 2014.[22][23] These partially humanoid Slivers now only affected the player's own side of the board.[4][24] 14 Slivers were printed.

Only one year later, Slivers returned in Magic 2015.[25] Notable is the return to the original art style in Sliver Hive.[26]

Slivers were considered for the return to Dominaria, but were found too problematic in that they required a significant commitment to space that wasn't available.[27] It was announced that the next time we would see Slivers there would be a good chance that they would resemble their original body shape. Asked if they would affect all Slivers in play, Mark Rosewater declared that that ship has passed.[28]

Shortly after, Slivers in their original (pre-M14) form were featured in Modern Horizons, where they are the white-red draft archetype.[29][30][31]

Time Spiral Remastered featured a selection of the slivers of the Time Spiral block, concentrated in red, green, and white.[32][33] In addition, Cloudshredder Sliver appeared on the Timeshifted sheet.