Star (also known as Pentagram or Five-Point) is a constructed Magic: The Gathering format that is played by five players, each representing one of the five colors of Magic (white, blue, black, red and green).[1][2] Their deck may not include any cards that reference a different color or a land that produces a different color of mana. 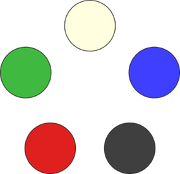 Players sit in a star pattern identical to the one on the back of every Magic card. The player with the white deck takes the first turn and then gameplay continues clockwise around the table.

Any color and the player representing it, wins when its two enemy colors have been eliminated regardless of who eliminated them. This means a player may be able to win even after being eliminated from play! Each player can attack any other player (even their allies), and each player can target any player, permanent, spell or anything else in the game. Decks are usually built following Standard deck-construction rules, but players can determine for themselves if they'd rather use Modern, Legacy, Vintage, or any other format.

While one-color Star is the most common form, it's possible to construct a game of Star that uses two-color decks with allied color pairs: i.e., one deck for each of

. Players are seated similarly to how they are in one-color Star but placed according to the gaps between adjacent colors rather than at each color dot. As with one-color Star, decks may not contain any cards which reference colors, not in their deck, or lands that produce a different color of mana. Lands or other effects which produce mana of any color are treated as producing either of the deck's colors.

Players win the game when both players using their deck's common enemy color are eliminated: for instance, the

player wins when both the

It's possible to combine regular and allied-color Star deck sets to play a ten-player game of Star. The single-color decks are seated as in the pentagon, with each dual-color deck seated between its constituent colors; i.e., the

player sits between the

player. A player is allied with the two players closest to them on either side and enemies with the five players opposite them. A player wins when their five enemies have been defeated; for example,

, and wins the game when