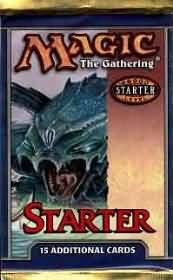 Starter was the next attempt, after the Portal series, to ease new players into the game. Rules text were also written in bold type and separated from the flavor text with a thick line. Unlike the previous starter-level sets, Starter didn't have its own set of rules. The terminology was now for the first time consistent throughout the range of Magic products. It was just simpler than advanced-level Magic because certain cards (such as artifacts, enchantments, most instants and cards with complicated abilities) weren't in the set.

Unlike the Portal sets, Starter did contain some instants (Counterspell, Extinguish and Remove Soul). On the other hand, Starter left out any creatures with a

The Starter set is slightly larger than a standard smaller expansion and most of its cards are reprints of cards already available.[3] The Starter set does contain twenty-six new cards created just for this release.

Starter was sold in 15-card booster packs (containing 1 rare, 3 uncommon, 9 common and 2 basic lands), five different 40 card theme decks and a 2 Player Starter Set. The booster pack featured the art from Denizen of the Deep. The 2-Player Starter Set came with two decks, two playmats, a step-by-step play guide, and a simplified version of the rulebook. It contained eight cards not available in boosters, two of which haven't been printed anywhere else (Royal Falcon and Willow Elf). The Starter set was accompanied by The Official Starter Game Strategy Guide and the Guru teaching program. Starter Demogame boosters contained 24 cards, a tip card, a rebate card, and an instruction sheet. Everything two players needed to play their first Magic game.

No specific storyline was developed for Starter.

Starter has one cycle and one vertical cycle:

Starter has one mirrored pair:

# Not available in regular boosters 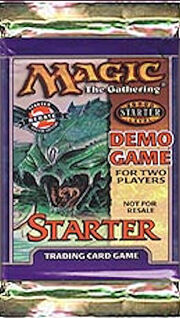