The province of Stensia is Innistrad's darker one, both literally and figuratively, but also the most unexplored and the most legendary.

Its valleys range from pasture fields to sinister swamps where dead conifer sink slowly. Its wooded lands, crossed by a dense fog, shows chromatic colors of dark green, purple and gray. Its indigo and black mountains disappear in the clouds, and humans can only imagine what live in their veiled peaks. The sun never seems to shine through the colorful clouds in Stensia.

The powers that govern Stensia, the vampiric bloodlines, reap the benefits of the isolation in the region. The chain of mountains of Geier Reach that dominates the province, separates the valleys from each other, making them easier to monitor and control. The suffering humans of Stensia have an irrational home loyalty, but strictly speaking, have few options: they are trapped in the narrow mountain passes of the province and attached to their customs and lives of meetings.

The mountain range that dominates Stensia, the Geier Reach, defines it utterly. This chain grows steadily higher in elevation as it moves from the borders with Gavony and Kessig toward the province's outer edge. Inland, the mountain peaks are forested, whereas in the chain's middle the tree line gives way to bare rock; at its verge, the peaks disappear into the clouds. The highlands are dotted with caves and crevasses where vultures, bats, and other larger creatures reign. The passes through Geier Reach are few and precious; all who travel into or out of the province must use them. In the remotest parts of the Geier Reach live dragons, brutal fire-breathers that prey on any creature that strays into their territories. 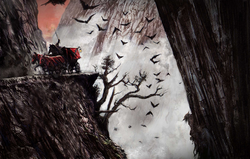 The shape of the Geier Reach creates two long valleys in the province, and foothills separate those valleys into numerous, isolated segments. 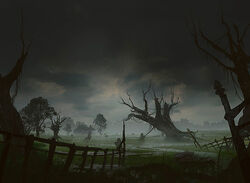