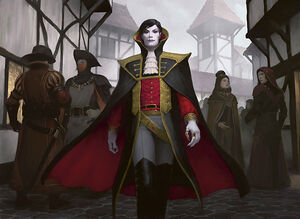 Unwilling to take part in the political and social machinations of Stensian vampires, those of the Stromkirk line chose to concentrate their power in Nephalia instead. As a result, their disguising glamers, or illusion magic, are more powerful and more sophisticated.

Stromkirk's progenitor, Runo Stromkirk, was a high priest in life who worshiped a pre-Avacynian god of the sea and storms, and Stromkirk vampires still feel a slight affinity with the coast. Some Stromkirk elders have achieved the ability to transform themselves into mist.

Nephalia has always been lightly forested, but in the last century, its few trees have been cut down or destroyed due to the vampires' fear of them being turned on them as stakes and other weapons. Runo, the progenitor of the Stromkirk line, was crafty in his removal of the woodlands. Early on, using his glamors and sizeable fortune, he turned the human populace into artisans, supporting their efforts in building fine cities, proud ships, and vigorous, provincial commerce—all based around wood. Prosperous and plentiful humans are good business for the Stromkirk, so Runo became a kind of secret Nephalian patron, supporting master craftsmen and commissioning buildings, towers, and ships while funding any vampire-friendly efforts by alchemists and magisters. Out of this, Nephalia has become widely known for its masterful crafting and artistry with wood. Nephalian buildings, ships, chapels, and houses all bear a distinct and inspired art that sets it apart from the other provinces.

Drunau is where the Stromkirk vampires have established their ancestral manor and their center of commerce outside of Stensia. Here, humans who possess especially delicious blood are treated like the most precious livestock, knowing a life of pampered bondage but being protected from all the other dangers of Innistrad. All this takes place within the elegant ballrooms and mahogany studies of Stromkirk manors.

In Nephalia, when vampires must walk among humans, they use glamors to disguise themselves so as not to drive away their human neighbors. Occasionally, a newly sired vampire leaves the family fold of civilized decorum and goes on a blood-soaked frenzy of feeding. Often the Stromkirk deal with this as swiftly and as quietly as possible, especially if the vampire is a rogue from outside of the bloodline.

The Stromkirk vampires who gave themselves over to the Nepahalian coastal cults were among the first of Innistrad's denizens to be transformed into Eldrazi spawn.