Tamiyo is a truth-seeker. She aims to understand and seeks truth and records that truth for all time. She is reluctant to interfere.[1]

When the field scholar's spark ignited, the secrets the Multiverse offered were a greater dream than any she had ever had. Each plane seemed to be an unexplored trove of knowledge to be brought back to the great scroll-towers of Oboro. For Tamiyo, every plane holds a mystery that makes it unique, and she spends a great deal of time studying whatever she can. However, in the end she always returns to her loved family and her husband Genku in Otawara.[1]

Tamiyo is centered in blue, with secondary white and green mana. Like all Moonfolk, she is capable of flight.

Tamiyo and Genku have several children: among others their son Hiroku, daughter Rumiyo and their adopted nezumi son Nashi. Tamiyo's parents are still alive and she has at least one brother or sister.[2]

Tamiyo has founded a small, informal story-circle that exchanges stories about what happens in the Multiverse. Members of Tamiyo's Story-Circle include fellow planeswalkers Narset, Elspeth, Ajani Goldmane and possibly Dovin Baan as a former member.[3]

On Innistrad she found the mystery of the great silver moon that hung in the sky. Tamiyo observed Innistrad for many cycles, using her powers as a Planeswalker to gain insight into the forces the moon exerted on the world below. She watched with rapt attention how the moon affected the werewolves and vampires on Innistrad, and she wrote extensive notes on the ebb and flow of violent frenzies in relation to the moon's influence. Her curiosity eventually led her to the door of the famed Nephalian astronomancer Jenrik. Tamiyo spent months in his moonstone tower pouring over countless charts, adding her own observations to his collection about the odd power the moon holds over the denizens and populace of this plane.

When Avacyn was freed from the Helvault Tamiyo excitedly began writing theories about the angel's influence on the land, its creatures, and the moon. The nature of the Helvault, the creation of the wolfir, the reappearance of the gryffs, and the origins of the newly empowered holy wards have been filling her scrolls with further questions.

Meeting with other planeswalkers[edit | edit source]

In the months after the opening of the Helvault, Tamiyo returned for a short visit home with her family. During that time, Ajani Goldmane visited her from Theros where he had witnessed Elspeth's death. She allowed him to stay until he was ready to move on.[2] 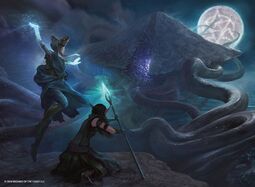 After Avacyn went mad through Nahiri's machinations, Tamiyo started to investigate this new phenomenon. Again she only wanted to understand and didn't want to destroy Avacyn, because the angel warded the entire plane against unknown evils. However, Jace Beleren persuaded her to face Avacyn together.[1] When they confronted Avacyn, they almost lost their fight. In the end, Sorin Markov showed up and destroyed his creation himself.[4] After the last protection of Innistrad had vanished, Jace and Tamiyo witnessed the arrival of the third Eldrazi titan, Emrakul. Jace immediately went to fetch the Gatewatch.[5]

Joining forces with the Gatewatch, Tamiyo was the one who deduced that Emrakul could not be defeated like the other titans, but had to be sealed. Pointing to the moon as the origin of the Helvault, she combined forces with Jace and Nissa to seal Emrakul. While the spell seemed to fail at first, Tamiyo took out one of her iron-clad scrolls and the spell succeeded to seal the titan. Afterwards, Gideon approached her and offered her a place in the Gatewatch, but Tamiyo declined, seemingly shaken by the experience.

Later, she and Jace met in an abandoned chapel. She revealed that she had been possessed and that the scroll's spell had not been of her design, but of Emrakul. She left afterwards, leaving Jace to ponder what Emrakul's plan was.[6] 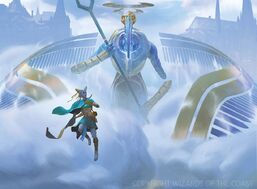 Tamiyo traveled with the Gatewatch to Ravnica for the final confrontation with Bolas, and immediately became trapped there due to Bolas's use of the Immortal Sun. She initially wished to simply observe the conflict without directly getting involved. However, while recording the events of the war, she was forced to put her neutrality aside when confronted by the God-Eternal Kefnet.[7] Alongside many other planeswalkers and Ravnicans, she fought against the Eternals of Bolas' Dreadhorde.[8]

During the invasion, the trapped planeswalkers (including Tamiyo) got together with Ravnican leaders to strategize. Tamiyo was one of the few planeswalkers who chose to remain on Ravnica after Chandra disabled the Immortal Sun, helping the Gatewatch in their fight against Bolas. She survived the battle.

Tamiyo participated in the memorial service for Gideon on Theros.[9]

Tamiyo travels through the multiverse collecting stories. She uses these stories as catalysts for her magic.[1]