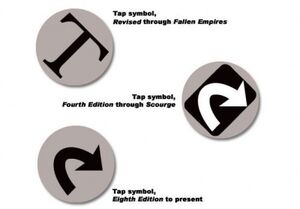 Tap is an evergreen keyword action.

It is the act of turning your cards 90 degrees to indicate that its resources are spent.

When the game was designed, lands were seen as the primary resource for paying for your spells. The problem is, you have to find a way to indicate that they have been used. An elegant solution was found. You can turn your land 90 degrees to the left to indicate it is spent. This is called tapping. The same applies to creatures. Often you do not want them being able to attack and block on the same turn. For this the same method of tapping was introduced. Often when there is an ability on a creature or artifact it has tapping as a cost for using it.

After a few years (around 4th Edition) there came a great invention: The tap symbol

. This symbol was quickly incorporated into all cards requiring tapping as a cost. Even better, now it is possible to have a different kind of tapping. Take Root-kin Ally. This card has the Convoke mechanic that lets you tap creatures to reduce its cost, but it also has another ability that lets you tap two of your creatures to make it larger. Neither of these abilities use the tap symbol and therefore they can be used on any creature (even those with Summoning Sickness).

Every tapped permanent untaps during your untap phase. Untapping has been part of the game since Alpha. There was a card called Instill Energy. It lets you untap the enchantedcreature once each turn. The ability to untap a creature has been used a lot during the life of Magic, but it wasn't until Shadowmoor that it has been used as a full mechanic. It uses the untap symbol

Retrieved from "https://mtg.fandom.com/wiki/Tapping?oldid=54774"
Community content is available under CC-BY-SA unless otherwise noted.