Tarkir is the plane where the Khans of Tarkir block takes place. It is inspired by the history and cultures of eastern Asia. 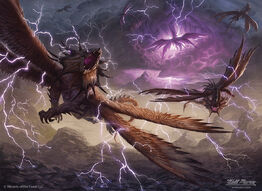 Tarkir is the rugged home of Sarkhan Vol and Narset, and for ages has been ravaged by ambitious warlords of five rivaling clans.

Dragons were born from Ugin's elemental storms, which spawned different broods of dragons in accordance to terrain, each with their own motives and breath weapons.[2][3]

In the present of the original timeline, dragons were extinct, leading to Sarkhan Vol's fascination with them as a planeswalker. They had been hunted to extinction long before Sarkhan's time.

More than a thousand years earlier, the clans had fought a war against the dragons for their own survival. After Ugin's death at the hands of Nicol Bolas, the elemental storms that gave birth to the dragons ceased and no new dragons were born, changing the tide of the war. Ultimately, the warriors of the clans were able to destroy them all.

In the centuries that followed, the five warrior clans claimed dominion over Tarkir, and are fighting over every scrap of territory. While some khans [4] are content to rule their own homelands, some wish to rule all of Tarkir. The clans have co-opted ancient draconic magic to disguise their strength and best their foes.

When Sarkhan eventually travelled back in time, he prevented the extinction of the dragons by saving Ugin after his battle with Bolas. Ugin is preserved in a hedron cocoon as he regains his strength. During this time, the elemental storms grew in intensity, with the dragons growing more numerous and powerful and eventually overtaking the clans in an event known as the "Khanfall". In the aftermath, the word "Khan" was abolished among all Clans and five dragonlords and their broods rose to dominate the humanoid races, forming new clans over the remains of the old. These new clans continued to clash with each other over territorial disputes.

Regions differ from arid desert plains to humid tropical jungles to frigid snow-covered tundra. According to Sarkhan, Tarkir has no oceans or seas. Dragonbones littered the landscape.

Tarkir is a plane of five warring clans, each worshipping one aspect of the dragons:[11][12][13] 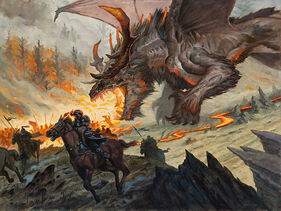 Five types of dragons, each lead by a prominent and eponymous figure, existed:[6]

Following the rise of the broodlords and the passage of time, the dragons matured to new levels of power, gaining the additional title of Elder. While these five dragons are no doubt the most powerful on Tarkir, the term is used separately of the Elder Dragons that once waged war across the multiverse, making them a distinct breed of dragon rather than dragons of the same caliber as those ancient creatures.[14]

Tarkir is influenced by the history and cultures of Asia.

The Abzan were based on the Persian Empire, the Jeskai on Shaolin Monks, the Sultai on the Khmer, the Mardu on the Mongols and Japanese, the Temur on Siberian cultures.

Tarkir was built from the plane Mongseng from Planechase 2012.[16] After the decision was made to use Mongseng as the setting for a full block, unspecified considerations led to the renaming of the plane.[17]