For other uses, see Tempest (disambiguation).

Tempest is the twelfth Magic expansion and was released in October 1997 as a standalone set, and as the first part of the Tempest block. The set continues the Weatherlight Saga on the stormy plane of Rath.

The rarity break down of the 350 black-bordered set is 110 commons, 110 uncommons, 110 rares, and 20 basic lands. Tempest's expansion symbol is a cloud with a lightning bolt, to symbolize Rath’s turbulent sky and Tempest’s tumultuous plot.[6] This set was the first after Antiquities that featured Richard Garfield in active role as designer. 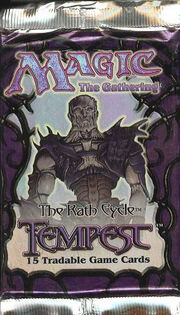 Tempest was the last set that was marketed as a standalone set, and the first that was advertized as a expert-level set in the new rating system for the game sets. WotC had decided not to target the large expansions toward new players; the simplified Portal cards and those in the base set were for them. Tempest was sold not only in the tradional 60-card starter decks and 15-card boosters but also in a new form: preconstructed theme decks. Using only Tempest cards, the design team built four theme decks, marketed as a ready-to-play introduction to the set. The accompanying booklet explained the play strategy for each deck and suggested ways to strengthen them by swapping in cards from other sets. Another difference from the previous large expansions came in the rulebook. Anyone buying Tempest cards could safely be assumed to have either a Fifth Edition rulebook or a friend who could teach them the game. So instead of reprinting all the rules in the Tempest booklet, WotC only printed a brief overview and a few pages describing the features that were new in the set. The rest of the booklet, some fifty pages, profiled the main characters and summarized the Tempest story. Each Tempest booster contained 15 cards: 11 commons, 3 uncommons, and 1 rare. The packs featured artwork from Auratog, Volrath's Curse and Commander Greven il-Vec. Tempest was the first set to feature a special prerelease card: Dirtcowl Wurm. The card was not foil; it was a normal version of the card with the word "Prerelease" and the Magic "M" stamped in gold leaf on the type line.

The Official Guide to Tempest is a complete companion card set, written by Beth Moursund. This guide gives tips for playing in a Tempest-only environment and how to best use Tempest cards with Fifth Edition. There are full-color reproductions of all of the Tempest cards, along with information on the rarity of the cards and current errata.

The set takes place on the stormy plane of Rath, where Gerrard and the heroes of the Skyship Weatherlight set out to find Volrath's stronghold.[7][8]

The block mechanics Buyback and Shadow were introduced in this set.[9][10][11] White, blue and black colors had creatures with shadow (white Soltari, blue Thalakos, black Dauthi), while green and red have multiple methods of blocking creatures with shadow. The abilities associated with Slivers, Licids, Spikes and Flowstone were also introduced in this set. Every color had a sliver and licid. There was one green spike, that served as a preview of sorts of the rest of the Spikes yet to appear in the block. Flowstones are red creatures.

Tempest was the first set to be released with pre-constructed theme decks. The decks are:

The following cards have been reprinted from previous sets and included in Tempest.

Tempest has one colorshifted card: