Tempest Remastered is a Magic Online-only reprint set that was released on May 6, 2015. It was available until May 27, 2015, but was expected to return on a later date.

Tempest Remastered was intended to support the Legacy format, and got sought-after cards into the hands of players.[2] It did not perform as well as Wizards of the Coast had hoped.[3]

For Tempest Remastered, R&D revisited the Tempest block. The 621 cards from Tempest, Stronghold and Exodus were reduced to the best 269 and the best playing archetypes. The set contains 101 commons, 80 uncommons, 53 rares, 15 mythic rares, and 20 basic lands.[4] There's no new art, but the cards have received new card frames. Several rarity shifts allowed for a better draft environment.[5][6] Green received lots of rarity downshifts because it was easily the worst color in the original set. On the other hand, a couple of strong red and black creature-removal spells were removed. The Licids were considered a failure, and didn't make it either.[7] Cycles (e.g. Slivers) were broken up.

Because digital isn't bound by the Reserved List, Tempest Remastered was able to feature 22 cards from that list. Excluding basic lands, the set contained 143 cards from Tempest, 58 from Stronghold and 48 from Exodus.

Tempest Remastered was available in booster pack form, with each booster retailing for $3.99. Each pack contained:

Each pack had a chance at a premium card replacing one of the common slots, with the same odds as other Magic booster packs. 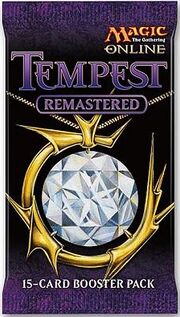 Changes in rarity, compared to the cards in the original Tempest block.