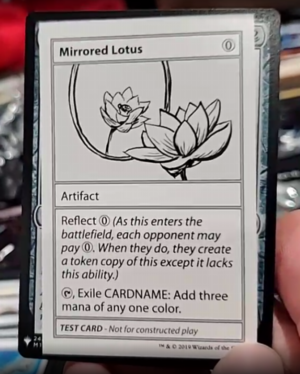 A test card is nominally a "playtest card" but is actually featured in the Mystery Booster set and intended for play in limited formats.[1][2] Test cards feature various new mechanics: reflect, quadrupling, land tokens, etc. Some of these are similar to how Future Sight tested out new mechanics that later appeared in regular sets.[3][4]

Test cards feature black and white rectangles that look like they have been stickered on cards with a regular card frame of the appropriate color, with a funny placeholder name and art. They aren't considered to be silver-bordered and don't necessarily follow silver border rules.[5] Although they explore unused design space, they all work in the official Magic rules.[6] The test cards were mostly created to be entertaining to look at and play a match or two with. They have not been put through the rigor that normal Magic cards, including silver border cards, are put through. Mark Rosewater considers them more as entertainment content than as game content[7], and has expressed concern with people taking them too seriously.[8][9][10][11] Gavin Verhey remarked that the test cards range from things they would never do on actual cards to things they are interested in doing and want feedback on.[12]

Test cards are not meant for Constructed play, but may be used in Chaos Draft. Many were designed with Cube and Commander in mind.[13]

The test cards are illustrated by various R&D members.[14]