Tevesh Szat, the Doom of Fools, born Tev Loneglade, was a human planeswalker from Dominaria with a draconic form and one of the Nine Titans, a group of nine planeswalkers led by Urza in the defense of Dominaria.[1]

Although initially of a neutral disposition and refusing to become involved in others' matters, Szat's transformation to an evil character followed the death of his sister, prompting him to neutralize the world into silence. He would become a recurring evil force within Dominarian history and would plunge its continents and even the entire plane into chaos, culminating in his betrayal of the Nine Titans and his death at Urza's hands. 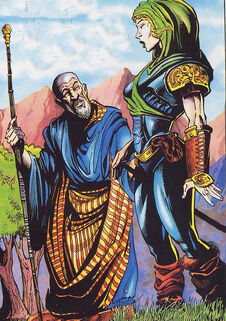 Tev Loneglade lived along the Sarpadian coast with his sister Tymolin Loneglade before and during the Brothers' War.[2] Growing up, Tymolin looked after Tev taking care of him and protecting him from threats. An accomplished fighter, Tymolin was highly adept with a blade, able to stand her ground against many foes. After becoming a planeswalker, Tev became fiercely protective of Tymolin, and enchanted her with eternal youth. They traveled to both Argoth and Terisiare with disastrous results, leaving Tev guilt-ridden. Eventually, they returned to Sarpadia where Tev became reclusive.

While living alone in Havenwood, Tev's guilt manifested into hatred and contempt for everything because of his absolute power and inability to change people. An old man, Tev has grown callous, caring for no one but his sister. Tymolin, however, remained his opposite in personality, spending time with her dwarf lover Kaylen and thrusting herself into inner-empire affairs. During her marriage, Tymolin also had an affair with an Icatian Priest by the name of Oliver Farrel. In 170 AR, during an orc–goblin attack on the Dwarven empire, Kaylen fell in battle when he was stabbed from behind by an orc.

Tev came to Tymolin's rescue after she was banished from the dwarven empire. During this time together, Tymolin pleaded with Tev to intervene and help defeat the forces of chaos. Tev continued his lack of intrusion, refusing to either stop the orcs and goblins or help the dwarves. He preferred to remain isolated and let the world's events run their course; however, his apathy merely masked a bitter hatred for everything he had developed from his absolute power.

While travelling near the Havenwood-Icatia border, Oliver Farrel and his Farrelites attacked Tev and Tymolin. During this fight Farrel threw a grenade-like aeolipile at Tev, who responded by disenchanting Farrel's powerful cloak from the Farrelite champion Sianna. Sensing a new weakness in Sianna, Tymolin struck at her and as the Farrelites retreated became separated from Tev.[3]

Alone in Havenwood, Tev became infuriated at the audacity of the attack. His grip on humanity began to slip and his image shifted from that of an old man to a more draconic visage. In his search for Tymolin, he happened upon the elven master-scout Loren under attack by the druid Morgan and several thallids. Showing his loss of isolationist stance, Tev incinerated the thallids, leaving Loren alone to fight Morgan. Tev did this not out of compassion for Morgan, but to make the fight fair, and commented that if it had been a single thallid and four elves the elves would now be dead.

During this period, Tymolin was captured by Vaylesh and the Order of the Ebon Hand. She managed to kill two members of the Ebon Hand, but was eventually subdued with a sleeping potion. Vaylesh used her to lure Oliver Farrel into a trap, which backfired when Farrel stabbed Tymolin to death. Tev, sensing his sister's demise, lost all grip on humanity and fully transformed into the serpentine dragon-form he would possess in his remaining days. Flying into the Ebon Hand encampment, Tev incinerated everyone present, including Sianna, Oliver Farrel, and Vaylesh.

After the deaths of his sister's killers, Tev renamed himself Tevesh Szat and vowed to seek "ssssssilence". His first action was to use a Planar Gate to summon the orc–goblin army onto Montford. Although Icatia would push back the attack, Szat would methodically orchestrate and deliver killing blows to the various standing empires of Sarpadia.[4] 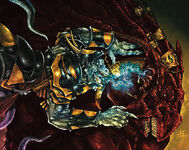 Szat continued destroying civilization after civilization, believing them to lead only to decadence and corruption. He manipulated the battle between Freyalise and Jason Carthalion in such a way that the city of Storgard was irreparably damaged. During this time, Szat and another evil planeswalker, Leshrac, acted as patrons to the necromancer Lim-Dûl during his war against Kjeldor. 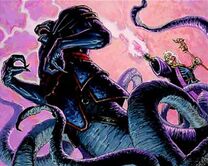 Szat attended the Summit of the Null Moon, where he fought Freyalise. After that he tried to intensify the Ice Age, but was defeated by Jaeuhl Carthalion and fled to Shandalar, where he was defeated again, this time by Kenan Sahrmal.

Szat stopped his rampage for a time and retreated to a plane of perpetual darkness. Here he was visited by Urza, who wanted him to be part of the Nine Titans and attack Phyrexia, as Szat had dealings with Phyrexia and knew the layout of the plane. However, Szat betrayed the Titans, convinced Darigaaz to free the Primeval Dragons, and killed Daria and Kristina of the Woods. Urza then revealed that he predicted Szat's betrayal and had solicited his aid precisely to solve a "moral dilemma" of powering up a superweapon, and used Szat's life energy to fuel the soul bombs that devastated Phyrexia. Obviously, fueling the bombs was the end of Szat.