The cathar Thalia was the guardian of the Helvault in the city of Thraben on Innistrad. Later she became the Heir of Saint Traft.

Thalia was one of Gavony's most promising cathars. As a young inquisitor, soldier, and vampire slayer, she proved her worth soon after graduating from the academy at the Elgaud Grounds.[1] But it was her obstinately caring soul that distinguished her and earned her a place among Thraben's elite ranks. She attracted the attention of a man called Lothar, the Guardian of Thraben, a revered soldier who led a force of elite protectors in service of the Lunarch. As Lothar's trusted right hand, Thalia learned of the Helvault, the holy silver obelisk in the Cathedral courtyard but she was not told the secret: that the missing archangel Avacyn had accidently become imprisoned within it.

When Lothar was killed in the Siege of Thraben, Thalia became the Guardian of Thraben in her predecessor's stead.

The breaking of the Helvault[edit | edit source]

The planeswalker Liliana Vess sought to free the demon Griselbrand from the Helvault in order to destroy him. Because she couldn't destroy the Helvault herself, she forced Thalia to do so by threatening the lives of her soldiers.[2] With the Helvault destroyed, both Avacyn and the demons were unleashed back into the world.

Avacyn's return caused a surge in the holy magic across the plane. Her presence revitalized the holy blessings of parish priests and the wards carved into roadside shrines. Flights of angels returned to strike down the monstrous beasts that plagued the provinces. Archmages whose divine magic had been damped regained their power, now able to wield powerful spells in Avacyn's name again. 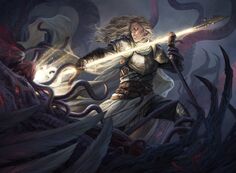 Avacyn's peace only lasted for a short while, because she became affected by the madness caused by the machinations of yet another planeswalker, the lithomancer Nahiri. The archangel turned against the very humans she was sworn to protect and started to remove every perceived blemish on her plane by killing them. Meanwhile, the Church of Avacyn was infiltrated by the Ormendahl worshiping Skirsdag. Seeing the corruption and unable to reform the church, Thalia left and created the Order of Saint Traft to battle evil.[3] Rem Karolus gifted her with the spear of the deceased Avacyn. At the Battle of Thraben, the Order made a temporary pact with Olivia Voldaren's vampire army. Joined with Traft's spirit, she battled numerous Eldrazi. Brisela appeared too much for her, but Sigarda came to the rescue.[4]