Thassa is the God of the Sea on Theros.

Thassa is the god of the sea and is also associated with aquatic creatures and the secrets of the briny deep. She is also the god of ancient knowledge, murmurs, gradual change, introspection, vast distances, long voyages, and far-ranging searches. Thassa can also be described as the god of patterns, such as tides, currents, ripples in water, and even the passage of time.

Thassa is the god who is least likely to be satisfied with the status quo, but in the meantime, she is also the least likely to rush to change. She works slow, eventual, and unfolding change to everything by resculpting the land, changing coastlines, and upending institutions. When she speaks, she usually does so in the future tense, always referring to what tomorrow will bring and uninterested in the reality of today. Thassa is slow to anger but implacable once roused. Her anger grows like a rumbling, cresting, unstoppable wave, destroying whole villages with its fury — then subside with the tide, dragging the evidence of her wrath out to sea.

Tritons and the humans of Meletis comprise most of Thassa's worshippers, as well as all who venture out to sea, whether for exploration, commerce, or war. Despite the tritons exalting her above all other gods, she shows no favoritism toward them, being equally impassive to all mortals. Thassa is worshipped with offerings of fish and salt by the poor, offerings of pearls and nacre by the rich, and with murmured prayers and quiet contemplation by all. When Thassa wishes to see a mortal, she does not issue a summons or grant a vision requesting a visit: the sea simply brings her guest before her.[1] 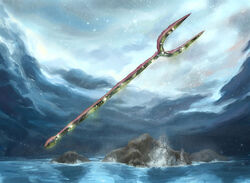 Thassa wielded the bident Dekella. Wielding Dekella allowed her to control the tides and stir the seas into whirlpools. Legend has it that a mortal sailor once stole Dekella and used it to destroy an enemy fleet and that he was punished by Thassa by turning his entire family into eels. Dekella was stolen by the planeswalker Kiora.[2] A new divine spear was forged for Thassa by the artisan god Purphoros thereafter.

The character of Thassa is inspired by a conflation of various Greek aquatic deities, most notably by Poseidon, the god of the sea. She is also close to the primordial goddess of the sea Thalassa (even with name). Thassa's "fish body" is inspired by the fish-tailed god Triton and the monstrous goddess Ceto.