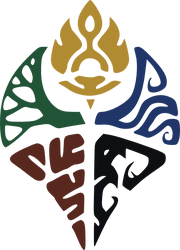 The Coalition was a name given to the unified forces of Dominaria that resisted the Phyrexian Invasion. In effect, this would place every known race of sentient (and sometimes non-sentient) creatures inhabiting Dominaria in the Coalition.

The Coalition was organized by Urza, who worked for several thousand years in preparation for the eventual Invasion. The first members of the Coalition were under Urza's direct control. The Coalition's original members were Urza's Metathran soldiers, various Serra angels located in and around Benalia, and the various denizens of Yavimaya under the direct control of Multani.

The Battle of Koilos[edit | edit source]

After the first Phyrexian portals were closed, the Coalition grew to encompass nearly every sentient race of Dominaria, from the merfolk of Vodalia to the survivors of Benalia and Llanowar. The first large confrontation involving the Coalition occurred at Koilos, where the Phyrexians established a stronghold at the site of the ancient Thran city of Halcyon. The Battle of Koilos was led by Urza's Metathran commanders, Agnate and Thaddeus. After Thaddeus's death, Eladamri succeeded him as leader of half of the Coalition forces. The Weatherlight served as Urza's flagship in the confrontation, and the Nine Titans later joined the fray.

After their victory at the Battle of Koilos and the subsequent Rathi Overlay, the Coalition forces were divided to focus on several specific confrontations. The Nine Titans began their assault on Phyrexia. Agnate led his Metathran and minotaur legions (alongside Commander Grizzlegom) in a direct assault on Urborg, the future seat of Phyrexian power. Darigaaz led the various dragons of Dominaria in an effort to protect Shiv, and later (after the machinations of Tevesh Szat) in a quest to revive the ancient Primevals. Eladamri joined with the various forces of Keld in the Battle of Twilight. The Weatherlight engaged in numerous skirmishes throughout the plane.

Eventually the various Coalition forces again joined on Urborg in a direct assault of the Stronghold, which had overlayed in that particular area. The allied forces made excellent progress throughout Urborg with the aid of Dralnu, but were halted at a stalemate at the foot of the volcano housing the Stronghold. After a successful mission to rescue Gerrard Capashen, the Coalition forces were faced with a foe they could not hope to stand against: Yawgmoth. The appearance of the Phyrexian god caused widespread death throughout Urborg, destroying most of the Coalition forces in one fell swoop. The mad god also spread his influence throughout all of Dominaria, causing deaths in the billions. 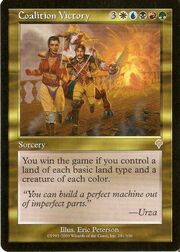 After the activation of the Legacy Weapon, Yawgmoth was destroyed (or perhaps merely banished), ending the Phyrexian Invasion and eliminating the need for the Coalition.

A Martyrs' Tomb was erected by the planeswalker Freyalise in remembrance of those Coalition forces who died in the defense of their world.

The five-colored Coalition Symbol, or at least part of it, is buried in the art of most cards with the kicker ability in the Invasion block.[1][2][3][4]