The Cursed Land is the fifth Magic novel. It was published in September 1995. It is written by Teri McLaren also known as Teri Williams.

Centuries ago, hungry for power, the wizard Nohr destroyed the Clan Tree of Cridhe, trying to harness its magic for his own uses. Nohr's deed brought a curse upon his family, divided the clan - and lunged the island of Cridhe into generations of darkness.

Now a turning point has been reached. Aylith, a gifted but untried mage, has been kidnapped by the cruel Nazir in an attempt to wrest away the last of her family's legacy. But what Nazir intends to take by force can only be given freely - or the ancient wounds of the Parting will never be healed. 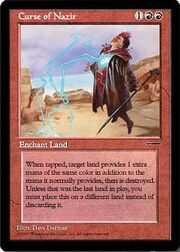 Fake Curse of Nazir promo for The Cursed Land, an April Fool's joke by Mark Gottlieb[1]

Instigated by the marooned Sangrazul Malvos, the weatherworker Nohr drunkenly confronts his former friend Haen. Haen is Keeper of the Clan Tree, a magic oak through which runs the mana for the entire plane. Nohr wields the sword Soulslayer, planning to pierce the mana line of the tree to become a planeswalker - soothing his jealous rivalry with Haen, escaping his hated home plane and freeing his marooned mentor Malvos. When Haen refuses to reveal the mana line, Nohr lashes out at the tree with the sword, sending out a freezing beam which causes the Clan Tree to explode into icy chunks. This also breaks off the sword's tip which lodges itself in Nohr's chest, just above his heart. The destruction of the Clan Tree brings about a curse that splits a chasm in the center of the isle of Cridhe and throws the natural order out of balance. Those on Nohr's side of the great rift take the fallen weatherworker into the mountains while Haen's people tend their Keeper, locked in a coma after his fall from the tree.

For many years there is no end to winter, until Haen finally awakes. His hands glowing with green fire, he institutes the ritual of the Awakening, magically bringing springtime to his part of the world, restoring the normal seasonal march.

The capture of Aylith[edit | edit source]

520 years after the Parting, the destruction of the Clan Tree, Nohrish soldiers descended from those who followed Nohr into the mountains, launch a raid on Inys Haen (the homeland of the Keeper). They hope to capture the Keeper and his young daughter Aylith and bring them both to Inys Nohr, and there force him to perform the Awakening ritual so as to have the light and warmth of normal seasons for their people and take it from the Haenish - for the power of the ritual affects only the lands where it is cast.

The soldier RoNal leads the Nohrish force to capture the Keeper. Things go awry however when Thix, unruly young kinsman to the Felonarch of Nohr begins burning buildings and attempts to ravage Aylith. The Keeper and his wife die in the fire and RoNal is forced to kill Thix rather than allow him to rape the young girl. With Aylith in tow they begin a grim march back to Inys Nohr. Aylith's cousin, a shepherd named Jedhian, follows behind them planning a risky rescue, first stopping to bury Aylith's dead mother with a discarded sword -which turns out to be the centuries- lost sword Soulslayer.

On the march to Inys Nohr, Aylith is nearly devoured by a shroud - a magical shapechanger that disguises itself as a blanket. Thereafter she strikes up a lukewarm relationship with RoNal's warrior daughter Lorris, who is impressed with her ability to survive the attack.

In the hands of Nazir[edit | edit source]

The Felonarch Nazir, whose family line has been cursed with madness and a birthmark above their hearts (mirroring the wound received by Nohr), has fallen into an uneasy alliance with Malvos. Malvos has entered into his service as an apothecary, brewing a formula to forestall the progresss of Nazir's family curse.

When the raiding party returns, Nazir has Malvos take his place on the throne so that he may pretend to be a servant and investigate the failure to capture the Keeper and the death of Thix personally. RoNal is taken and stripped of his station for having been responsible for the death of Thix, and Aylith is taken to a study for interrogation. Aylith meets an elf in the Felonarch's service named Feryar, who shows her a chamber in which the last living branch of the original Clan Tree, with its single acorn, is kept. She is enchanted by Nazir, still disguised as a servant, and is magically compelled to reveal to him the truth about her abilities as Keeper - that her father transferred the Memories of the Clan Tree to her before he died. Meanwhile, outside the tower Jedhian just gets to the window where Aylith is talking with Nazir when he falls nearly to his death. He is caught by a talking owl who turns out to be Feryar and is dropped at the feet of Lorris, who shuffles him off to a secret chamber in the courtyard. She makes a deal with him, if he'll rescue her father RoNal, she'll help him and Aylith escape.

As their plans to escape are in progress however, RoNal's sentence is already carried out. He is lashed severely and tossed into the same dungeon pit as Jedhian - his back already covered by the deadly infection known as the Walking Plague. He's as good as dead. Then the two men are attacked by the monster that lives in the pit beneath the castle, a giant frog transmuted by awful magics from what was apparently once a man or several men. RoNal sacrifices himself to the beast, hoping Jedhian will survive and help his daughter Lorris escape to restore his honor and earn her freedom from Nazir before she someday shares his fate.

They meet Arn, a young slave of Nazir when a raiding party sacked his village among the Far Clans, small independent hamlets of Nohrish who shun the Felonarch's rule. With a twisted shoulder from birth, made worse by his lord's abuse he serves as messenger and whipping boy for Nazir. RoNal was always kind to him, however and once he learns of his fate he pledges himself to Lorris and Aylith's cause.

Meanwhile, public unrest grows, turning into a full rebellion against Nazir as the plague and poverty ridden townfolk and the mirkalbion slaves rise up and mob the fortress gates. The latter are mutated people addicted to the 'ardre fungus which will die if it comes in contact with the sun. Nazir is forced to advance his plans, offering the mob to either provide them with an Awakening to bring the light to Inys Nohr or the execution of their prisoner, Aylith's cousin. Aylith is flushed from hiding, using her newly practiced healing arts she fixes Arn's shoulder and swaps clothes with him in order to stealth close to the Felonarch and then reveals herself. She tries to form a protective weave with her magic but the enraged Felonarch runs her through with Soulslayer—right above the heart. Her limp form is carried away by Feryar in owl form. Lorris makes off with Jedhian in the confusion as an angry mob descends on the castle.

Fearing the rebellion, Nazir and Malvos take their best forces and secretly depart Inys Nohr to strike Inys Haen before Aylith's friends can arrive there. Arn, Lorris and Jedhian steal a boat and attempt to sail the icy River Sobus, the water filled remains of the chasm originally created by the cataclysm when the Clan Tree died. Eventually the two parties converge on Inys Haen to discover it completely empty.

Aylith is carried by Feryar to the subterranean paradise of the elves - Loch Prith. The many forms of life that would have died in the harsh winter above are magically preserved here. They bathe and heal her, but it is revealed that to overcome the spiritual Soulslayer poison responsible for the Nohr family curse, she must travel within herself and heal her own inner pain and lust for revenge. For now, she is not capable of bringing about the Mending of the Clan Tree without her hatred bending it into something horrible. She journeys into herself and confronts her hate as an immense fiery pit with a horrible bitteroot vine at its heart and is finally able to overcome it.

Arn leaves the group to try to unite the Far Clans to bring their forces to capture Nazir and his small force away from his fortress, but in meeting with the Third Clan, their leader gives him a false map meant to lead him to his death in an icy marsh full of carnivorous fungi. Just as he is about to succumb, he is rescued by Feryar and is successfully able to broker the alliance. Meanwhile, as the last of the Felonarch's troops march into Inys Haen she sneaks up behind him to take her revenge. Jedhian only just manages to convince her to take him prisoner instead. As they march him toward the army to ransom him for an end to the hostilities, he suddenly frees himself and flees, leaving Jedhian badly injured. Malvos is informed of the Felonarch's disappearance but won't believe it when suddenly Feryar flies into the camp and approaches him in elven form. Startled, Malvos grabs his sword, only then realizing that it is the Soulslayer - which the Planeswalker Tempé commanded would kill him if he tried to use it. His snake tattoos and the silver snakes worked into the sword's hilt come to life and bite him. Jedhian is found by the Nohrish and is brought in to heal Malvos. Malvos instructs him how to heal him of the poison - though it will cost him his only chance to ever leave Cridhe, crumbing the artifact sword to ash.

Aylith finds Nazir near frozen to death, fully insane, at the falls entrance to the caverns leading to Loch Prith. Nearly succumbing to her desire to murder him in this vulnerable moment, she instead ventures into his soul to heal him of his madness, his injuries and his addiction to potions that are mutating him into a mirkealbion. Healed of his evil, he and Lorris carry the overcome Aylith back to the spot where the Clan Tree once grew. There the former Felonarch and the Keeper recite the Awakening Ritual even as the Nohrish armies and Far Clans clash in battle around them. As the sun warms the entire plane for the first time in generations, melting back the ice, the armies cease to fight. A small sapling Clan Tree arises and the plane's balance is restored.

The mirkalbion, who are doomed to extinction without the constant dark, are invited by Feryar to travel with him to Loch Prith, where the drug they require to live - the ardre fungus, will always grow.

The death of Malvos[edit | edit source]

The stranded Malvos, healed but miserable, crawls away in exile and is finally visited again by his old mistress, Tempé. She demands he tell her the location of the plane's mana, but he eventually tires of talking to her after telling her what little he knows and crawls into his tent. She leaves him with a smirk, as the tent is actually a hungry shroud in disguise, which lulls him to sleep with a magical song and then collapses upon him, consuming him.