From MTG Wiki
Jump to: navigation, search
The Dark
Trivia

For other uses, see The Dark (disambiguation).

The Dark is the fourth Magic expansion and was released on August 8, 1994. It is not considered to be part of any block. 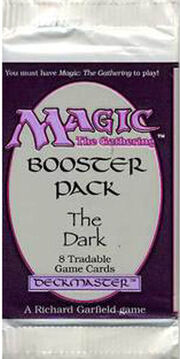 The Dark was printed on sheets of 121 cards and contains 119 unique cards total. The set's rarity breakdown is: 40 commons (40@C3), 1 Uncommon (1@C1), 78 Rares (35@U1, 43@U2). The Dark includes a goblin tribal theme, powerful abilities with intense colored mana and upkeep costs, and the return of Poison counters. The expansion symbol of the set is a thin crescent moon to evoke The Dark’s tone.[2] The Dark introduced the first multicolored noncreature card, the first common multicolored card, and the first enemy-pair multicolored card.

The Dark lands have a unique dark grey-purple colored text box, which was reprinted on the Chronicles version of Safe Haven.

The Dark was sold in eight-card booster packs which included six commons and two uncommons. Cards were available from mid August 1994 through mid November 1994. The print run was announced by Wizards to be 62 million cards. The Dark was the first Magic expansion that was released in the Italian language (the Italian Legends was released later).

The climax of the Brothers' War was the Sylex Blast, which lofted debris into the air blotting out the sun and creating The Dark. Without the sun the climate begins to cool, and an anti-magic religion comes to power, blaming the Sylex blast and its effects on all magic and its users. Persecution of these magic-using wizards led to the creation of the fabled City of Shadows in the east and the Conclave of Mages in the west, where they hid themselves during this time.

The Dark greatly expanded the concept of a "tribe," or a specific creature type (briefly touched upon in Legends with the kobold creature type). It contains six goblins, a card named "Goblin Rock Sled," two creatures with abilities that reference goblins, two Auras that can give a bonus to goblins, and a sorcery to destroy all goblins — Tivadar's Crusade. Despite this creature-type theme, most of the rest of the set used unusual, creature-specific creature types like other early expansions.

The following creature types are introduced in this expansion:

The Dark has no cycles.

The recurring cycle of color hosers is broken. Some green and blue cards support black and red, instead of hosing them. Metaphorically, in the Dark, White was abandoned by its allies Green and Blue.

In later expansions, there will be cycles of allied colors cards. In the Dark, this cycle is broken. As stated above, White is betrayed by its Green and Blue allies.

The Dark has one mirrored pair

The Dark has one functional reprint:

The artist Dennis Detwiller is incorrectly credited as Denise Detwiler on the following cards: