The Legacy was a collection of artifacts assembled by Urza, that work in conjunction to defeat his mortal enemy, Yawgmoth.

In preparation for the inevitable Phyrexian invasion of Dominaria, Urza devised a stratagem to create a champion; Urza's Legacy is more than a collection of artifacts. It is a construct of thought given purpose. During the story of the Weatherlight, it becomes evident that there is some magical force guiding the assembly of the Legacy. It evolves, incorporating artifacts and beings not originally intended as part of its design. In this way, the Legacy represented an intangible but undeniable guiding force; a fate constructed through artifice.

When the Weatherlight's plan to use the stored up white mana in the Null Moon failed to stop Yawgmoth, Urza told the crew the final secret of the Legacy Weapon. In order to fire the weapon they had to combine the various pieces they had gathered in their journey, along with the two stones within Urza's head, Karn's body, and Gerrard's life. Urza and Gerrard died in the activation, but the weapon successfully destroyed Yawgmoth. Karn, now infused with Urza's spark and the power unleashed by the Legacy Weapon, took up his former master's staff and soon left Dominaria.

The complete list of artifacts and beings known to be contained in the Legacy is as follows:[1] 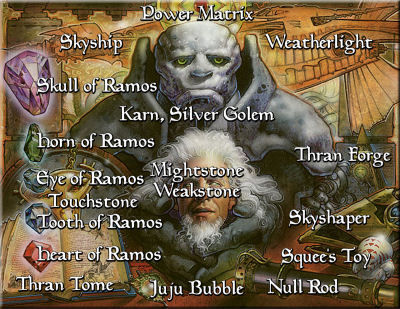