The Monsters of Magic 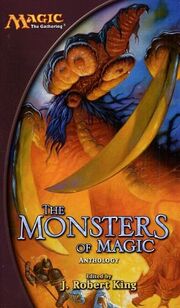 On Tolaria, a mage devises a spell that will exceed Urza's greatest creation, unless a phantom monster undoes it all. In Aphetto, a young fighter and his magic-eating atog launch a quest for vengeance against a deadly enemy. In Jamuraa, a cat-dragon discovers a whole nation like her and sets out to teach them who is queen.

Dragons, lhurgoyfs, delraichs, and other fearsome creatures from the world of Dominaria stalk the pages of these all-new tales.

Who Is Queen?[edit | edit source]

The nekoru Wasitora discovers that there are others of her kind.

Barrin suspects that one of his students is responsible for an attack on Tolaria's mechanical guardians.

A dwarf, an orc and a goblin named Strother, Borg and Elam strike a bargain with a lord of the pit.

The young elf student Ereth dreams to become a powerful conjurer one day. When her home Yavimaya is attacked by creatures resembling those from the Phyrexian Invasion she might get a chance to prove herself.

Oly, a former sailor and a notorious drinker is convinced that he saw a monster. No one believes him until a stranger comes to town with stories about dangerous creatures.

Cabalist Buric investigates animal killings a dragon might be responsible for. Strangely the carcasses were left alone. Whatever killed the cattle seemed to do it for pleasure, not to feed on them.

Rasarm and his atog Yekol break into the villa of Cabal lord Suarvol, who had Rasarms family killed on a whim.

Betrayed by a caravan leader named Sleedge, the sorcerer Raitrick would do anything to get his vengeance.

Tap needs to find the fabled Isle of the Gilded Tree and get a golden leaf before he can marry his love.

Salla en-Dal lives in the Vec village of Travec and regards it as her home. Although she is not really accepted in the community she does everything to save the settlement from destruction.

The Voice of Command[edit | edit source]

by Paul B. Thompson

Colonel Mocklen il-Dal has to deal with the newly arrived and troublesome Light-General Rogur. It seems that they are to eradicate rebels in this area but the evincar himself left a mysterious note for Mocklen.