The Secrets of Magic 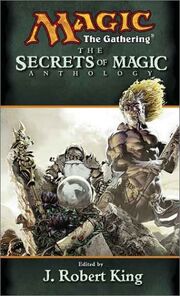 The world is a mystery.

Ancient troves of artifacts await discover. The origins of potent spells rest lost between the pages of archaic tomes. The evolution of monstrous beasts lies outside of a researcher's grasp—until now. At last, long-forgotten and expertly hidden secrets will be revealed.

For Want of Ink[edit | edit source]

by Paul B. Thompson

A Nut By Any Other Name[edit | edit source]