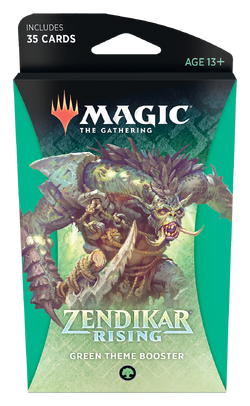 Magic Theme Boosters are booster packs targeted at deckbuilding players, providing a number of cards from a certain expansion set that can go straight into their deck. They also play up a set's flavor for those that might be interested in sampling a slice of a particular aspect of the world.

Theme Boosters contain 35 cards (a variable amount of commons and uncommons, and 1 or 2 rares or mythic rares) from a given color or theme. The MSRP is $6.99.

With the release of Dominaria, Wizards of the Coast began testing a new product at 300 Walmart locations across North America called the “Dominaria Theme Booster”. These contained 35 cards (a variable amount of commons and uncommons, and one rare or mythic rare) from a given color and theme, as well as artifacts and colorless cards. The MSRP is $6.99. By limiting this test to a single large account, WotC hoped to perform a controlled test that allowed them to more efficiently and accurately interpret sales results that would help inform future decisions about this kind of product.[1][2]

Apparently deemed a success, Theme Boosters also appeared with Guilds of Ravnica. This time around, they were bi-colored.[3] Later, Wizards of the Coast announced that Theme Boosters would be part of each main set's lineup going forward.[4] The composition of these theme boosters differs depending on the properties of the set.

Starting with Throne of Eldraine, nine out of ten Theme Boosters will have one rare, but one out of ten will have two rares.[5] The number of commons and uncommons still varies between boosters, unlike Draft Boosters where the number of each rarity mostly remains constant. You'll always get more commons than uncommons, however. A reference card is added to help expose newer players to different aspects of the game.

Theros Beyond Death featured 10 unique rares which could appear in the rare slot(s) of a theme booster. These do not appear in draft boosters, but have a chance of appearing in the ancillary slot of the set's collector boosters.[6] Kaldheim had similar extra cards.