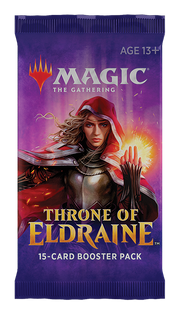 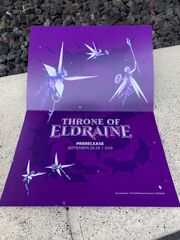 Throne of Eldraine is a top-down designed set, inspired by the romantic Arthurian legend of Camelot on one hand and Grimms' Fairy Tales on the other.[7] Besides Grimm, the set covers a range of European fairy tales that come from a variety of sources.[8][9] Mark Rosewater stated that he had been waiting 10 years to do a Grimm's world,[10][11][12] comparing it to the Lorwyn–Shadowmoor block that had erred in being too true to the source material rather than hitting the tropes that players knew.[13] Most of the top-down designs are fairy tale, but more of the nuts and bolts cards are Arthurian.[14]

Throne of Eldraine is the beginning of a new Planeswalker story arc.[19] The set is accompanied by an Ebook written by Kate Elliott, for sale on Amazon and other webshops. This is the only way to go deeper than the cards and read the full Throne of Eldraine story.[20] Wizards of the Coast announced that the Magic story will now be told through e-books rather than weekly episodic stories and that The Wildered Quest is the first example of this change in how Magic’s story will be told.[21]

The plane of Eldraine is a high-fantasy medieval world filled with knights and castles along with Magic's take on the genre of fairy tales. The key conflict of Eldraine is the five knightly courts vs. the magical creatures of the Wilds. The status quo is disrupted when the planeswalkers Oko and Garruk Wildspeaker kidnap High King Algenus Kenrith. His children, the twins Rowan and Will Kenrith, embark on a quest to save their father. In the end, the king is saved, Garruk is freed from his curse, and the twins' Planeswalker's spark ignites.

The cards that represent the Story Spotlights in Throne of Eldraine are:

The Draft Booster has the possibility of containing borderless planeswalkers or special new showcase cards. The Showcase frame is a catch-all term to cover a variety of different treatments that embody the spirit of the relevant set.[18] The art and frame will play into the set's theme (in this case it frames the card boxes with green vines). Each set will have its own unique showcase cards. Which cards get the treatment (and usually, it will just be cards from that set), and at what rarity, will vary from set to set. Showcase cards replace cards of the same rarity as the non-showcase card in packs. The showcase cards don't require a mechanic with a new frame, it just happens to be the case for Throne of Eldraine.[22] The Showcase cards replace cards of the same rarity as the non-showcase card in packs. By a technical mishap, there are no non-foil common showcase cards in booster packs.[17] Those appear only in the Collector Boosters. Every rare or mythic rare from the set that doesn't already have a variant frame (meaning that it doesn't exist as a borderless planeswalker card or showcase card) will be available as extended-art cards. The extended-art cards are all rares and mythic rares and are only found in the Collector Booster.

The name of the set was revealed at the San Diego Comic-Con on July 18, 2019.[23] An image of promotional flyers appeared on Reddit that same day.[24] These featured art with faeries, leading to speculation that the set would have an emphasis on faeries. Mark Rosewater had to make a statement on Blogatog to do some expectation management. He noted that there are Faeries in the set, but nowhere at the volume or importance that people were assuming.[25] Rosewater provided some more details on Saturday at the Magic panel. The panel wasn't live-streamed, but Wizards of the Coast tweeted it live and an article with the relevant info was posted later that night.[26][18]

To celebrate the addition of food to the game, Wizards of the Coast organized the First Great Eldraine Bake-Off, an Eldraine inspired online recipe competition.[27] 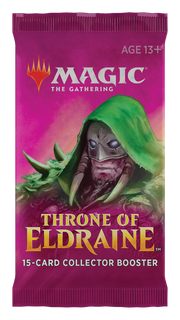 After a test run for Ravnica Allegiance, Wizards of the Coast introduced "Collector Boosters" as a regular feature for standard sets.[18] The expected price range is between $20 to $25 per booster. They are only printed in English and Japanese, and will have a limited print run. The contents are

The collector boosters are packaged 12 to a box.

The "Throne of Eldraine Deluxe Collection" is a special packaging of collectible products, sold for $449.99 in the Magicstore at Wizards.com.[28] The difference with the earlier Mythic Editions of the Guilds of Ravnica block is that this product doesn't contain Masterpieces.

The Deluxe Collection contains the following, all packaged in a premium box:​

A special Throne of Eldraine Gift Edition, essentially an embellished version of the bundle, will become available for the holiday season on November 15, 2019. 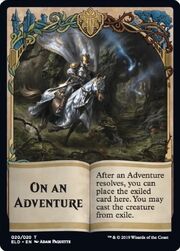 The sixteenth card in the boosters is a token, emblem or marker, with advertisements on the back side. There are a total of twenty different cards.[32]

Throne of Eldraine introduces the ability word Adamant; spells with Adamant have additional or alternative effects if you cast the spell with three or more mana of one color.[33] Together with the hybrid mana in the set, Adamant encourages monocolor drafting - in order of aggressive to controlling, it typically goes red-white-green-black-blue.

Additionally, there are heavy tribal themes around Knights and Non-Humans. Knights appear in all five colors, but they have the most tribal synergy in white, black and red.[34] Non-Humans are mainly green, blue, and red.[35] There are also artifact- and enchantment-matters themes.[3]

Adventure is a new subtype, seen exclusively on instants and sorceries attached to creature cards. Casting the Adventure half of a card represents sending the creature on an adventure before putting it onto the battlefield.[37][3] When the adventure resolves, the card is exiled. When exiled as part of the resolution, the creature may be cast from exile.

, Sacrifice this artifact: You gain 3 life.”

While War of the Spark and Core 2020 had only one cycle of colored artifacts, they are much more prevalent in this set.

Throne of Eldraine has fourteen cycles. 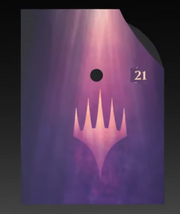 Throne of Eldraine introduces decks designed for the Brawl format.[39] These 60-card decks use cards from throughout Standard, from Guilds of Ravnica all the way through Throne of Eldraine. There are 20 unique cards in these decks that aren't found in Draft Boosters (but they can still be found in Collector Boosters.) Each deck has seven of them — four cards unique to that deck, one card shared with one other Brawl Deck, and two cards shared with each other Brawl Deck. These cards are all legal in Standard, Brawl, and all other formats that allow the latest sets (or at least ones where cards in new sets are legal). A life wheel is included in the packaging.[40] 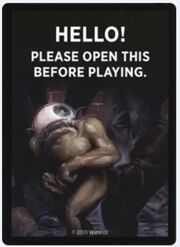 Corpse Knight reminder card. Read before playing.
This Brawl Deck includes a misprinted version of the Core Set 2020 card Corpse Knight.
Corpse Knight's intended power/toughness is 2/2, but the copy included in this deck was mistakenly printed as a 2/3.
To ensure that you have an accurate version to play with, we have included this corrected copy of Corpse Knight.
We recommend that you remove the 2/3 version and replace it with this one.