Tibalt is a red-aligned, secondary in black, half-devil human planeswalker from the dark world of Innistrad. On Kaldheim, Tibalt assumed the identity of Valki, God of Lies after imprisoning the real Valki in Karfell.[1]

Tibalt is a red-skinned man with two prominent horns. He is an empath specializing in pain, causing it, and drawing power from it. The pain is not limited to physical damage, as he has magic capable of instilling despair and exacerbating emotional weaknesses[2]. He loves to have fun in his own way, which is bringing pain and misfortune to those around him. He can feel this pain and even seeks it out, to heighten it and revel within it. He cares not for others, being selfish and sadistic to an almost inhuman degree.

Tibalt is primarily red-aligned, and secondary in black mana. When battling Chandra, he remarked that her flames couldn't hurt him, revealing a remarkable resistance to fire considering Chandra's flames had previously caused Ob Nixilis trouble. He also has the ability to create illusions.[2] As he planeswalks, he disappears in a mass of orange cinders like burning paper.[3]

Tibalt began life in Nephalia, an apprentice to one of the province's many Skaberen, but he lacked the skills required for the work of stitching together the dead. His repeated failures drove him into isolation, and there he nursed a growing hatred. In frustration, he turned his talents toward the realm of the living, using what his master had taught him to explore the true thresholds of the mortal frame. His experiments sought the limits of living organisms to withstand pain.

Tibalt began simply, using only common vermin, but the further he sank into his work, the bigger his subjects became, larger animals and eventually he moved onto people. He took in vagrants, unwitting people stepping into their own deaths. As if summoned by the evil nature of these vile experiments, devils began to gather near Tibalt's laboratory at night, whispering in their diabolic, chittering tongue.

Fascinated with his work, they sought to assist him, offering Tibalt insights into his obsession, the very nature of pain. Empowered with such horrible knowledge, Tibalt grew even more sadistic and more careless. But his descent hardly went unnoticed. His neighbors began talking, whispers passed around between the townsfolk of the terrible things they suspected. Tibalt continued on, oblivious to the rumors surrounding him.

It was only a matter of time before an inquisitor's boot kicked in the door of his laboratory. Holy warriors poured into his workshop and found him in a room filled with jabbering devils and torture devices. Tibalt was caught red-handed. His crimes would finally be answered, and the severity of them called for only one punishment: execution. However, though he may have ignored the townsfolk who whispered, he was not without foresight. At that moment, cornered, he invoked a potent and hateful spell built from the devils' utterances and his own grim discoveries. The spell fused his own essence with the devils at his side. Power flooded him, but at a cost; at that moment he experienced all the suffering that he had inflicted upon others. The shock and trauma ignited Tibalt's spark and he was flung across the Blind Eternities, away from his executioners. 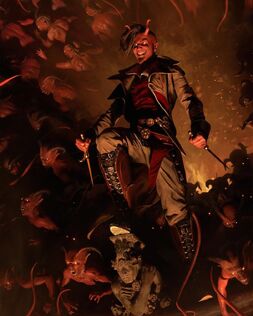 Together with Davriel Cane, Tibalt leads an army of devils during the War of the Spark.

Despite the peril of returning, Tibalt continued to return to his homeplane, taking a special delight in the torment of the Innistradi population. It was during one of these trips that he discovered the world in more peril than he could ever recall before, and it thrilled him. However, he soon encountered another of his kind, the vampire Sorin Markov who was attempting to spoil the diabolic fun of those that preyed on humanity. Tibalt decided that he had to interfere if for nothing else, just to torment the ancient walker.[4]

Tibalt was lured to Ravnica by the Interplanar Beacon, and immediately became trapped there due to Bolas's use of the Immortal Sun. Alongside many other planeswalkers and Ravnicans, he fought against the Eternals of Bolas' Dreadhorde, although Tibalt also delighted in tormenting civilians and causing wanton destruction. He led an army of demons and devils alongside the diabolist Davriel Cane.[5]

Tibalt survived the battle, as he was one of the many planeswalkers who left Ravnica and escaped to safety as soon as Chandra disabled the Immortal Sun.[6]

After the War of the Spark, Tibalt began harassing Chandra Nalaar.[6] He confronted her on Zendikar, using his magic to influence the inner pain she felt about failing Gideon. After a brief fight, his magic proved too much for the Pyromancer in her current state of self-pity. Aiming to torment her and revel in the pain, he unleashed an attack on Chandra that caused her to planeswalk away from Zendikar.

Tibalt traveled to Kaladesh sometime later to find Chandra's mother, and learn more about the planeswalker. He bound and tortured the Consul until he was interrupted by the sudden appearance of Ajani and the pyromancer herself.[6] Fleeing to his homeplane, Tibalt was aided by a horde of devils and overwhelmed his opponents. Gloating, he revealed that on Ravnica he had felt Chandra's pain screaming through the aether and that he had followed her to Regatha to find out if he could hurt her even more. He admitted he thrives on physical torment, psychic misery, and emotional anguish. Chandra realized that Tibalt's aim is for her to lose herself, and he might be more evil than Bolas for that. Her self confidence asserted itself, and she now knows that her guilt and sadness won't go away, but that it doesn't mean she has to be weakened by it. She was done feeding Tibalt, who she called a parasite. She knocked him out and delivered him to the local authorities to deal with. Tibalt was locked up by the local militia in a new rune-enforced prison that they claim can contain supernatural beings.

Tibalt somehow planeswalked to Kaldheim. There, he impersonated the god Valki and stole the Sword of the Realms in order to use it to bring chaos. At some point, prior to the events of the story, he was ambushed by a Horrible Beast, who "planted a seed" in him and held him hostage to make "a distraction" while the Beast would compleat the plane. Luckily (or not), Tibalt was going to cause chaos anyway.[7]

Tibalt deceived Valki and imprisoned him in magical chains, keeping the god imprisoned in the dungeon of King Narfi's palace in Karfell. In exchange for keeping Valki imprisoned, Tibalt promised access to the best treasures of the other realms for Narfi when the Doomskar began. Assuming Valki's identity, Tibalt began his scheme and spread chaos across the realms of Kaldheim. In Surtland, Tibalt warned the frost giants of an incursion of Torga Trolls that had awakened from a long slumber. In Bretagard, he promised the vicious Skelle clan the return of their demon master, Varragoth. In Starnheim, Tibalt uses the Sword of the Realms and opened an Omenpath for Koma to enter the realm and spread destruction. All across the realms of Kaldheim, Tibalt sowed the seeds of war and chaos.[1] Tibalt (disguised as Valki) visited King Harald in Skemfar and advised the King to prepare his army for the coming war. Suspicious of this "Valki", Tyvar Kell began to follow and investigate the "god" through the realms.[2] Meanwhile, Kaya found Tibalt rallying the Trolls of Gnottvold to war. Using the Sword, Tibalt escaped both his enemies into the realm of Immersturm.

The pair followed Tibalt and took the Sword of the Realms from Tibalt, but not before he had created a Doomskar. Lead by Varragoth, thousands of demons streamed through a giant rift in space to attack another realm.[3]