Time Spiral contains 301 all new black-bordered cards (121 commons, 80 uncommons, 80 rares, 20 basic lands) and a bonus reprint subset of 121 "timeshifted" cards. Time Spiral was nostalgia-themed.[2] Most of the cards in this expansion reference previous cards in some way.[3] The expansion symbol of the set is an hourglass to reinforce the time themes and to imply the idea that time is running out.[4]

Timeshifted cards make up a 121-card subset comprised entirely of pre-Mirrodin reprints, tying in with the set's theme of revisiting the past.[5][6][7] Each card in the subset features the old Seventh Edition card frame and has a new purple expansion symbol to denote their unique rarity. One timeshifted card appears in every Time Spiral booster pack, making the cards roughly 50% as rare as rare cards, which also appear once per pack but comprise of only 80 cards. However, in the Time Spiral preconstructed decks, timeshifted cards are treated as though they had their original rarity, as each deck features several of the timeshifted cards that were originally common, including multiples of the same card.

Timeshifted cards are treated as a part of Time Spiral block, thus it is legal in any format that uses Time Spiral's cards (Standard, Extended, Block Constructed, Modern). 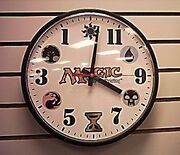 Time Spiral was the first set to use a new premium card distribution method. All premium cards were now included in booster packs replacing a common card. Past expansions replaced a card of the same rarity as the premium card. This created the possibility of "three rare" boosters in Time Spiral, as it was possible to find the normal rare, a premium rare and a Timeshifted card that was previously rare in the same pack.

The prerelease events for this set were held on September 23–24, 2006.[9][10] The prerelease card was a foil alternate art Lotus Bloom.[11] The release card was Sudden Shock. The set was accompanied by the novel of the same name by Scott McGough. Additional art for several tokens was created for Magic Online.[12][13][14]

After more than its fair share of cataclysms, the plane Dominaria is in ruins.[15][16] Over two hundred years ago, Phyrexia invaded the plane. In the end Phyrexia and its god, Yawgmoth, were defeated, but not before they devastated Dominaria.[17] Salt rains from the sky and the air is poisonous. The trees are gray and rotting and covered with a sickly, fungal kudzu. The elves must subsist on mossy scraps.[18] Their greenseekers roam Dominaria in search of any thriving plant matter,[19] but the plains are dry salt flats blasted by windstorms. Nothing grows there.[20][21] The swamps are littered with the dripping carcasses of Phyrexian horrors.[22] Mountains are eroded down to obelisk-like spires while seas' acidic waters eat away at the solidified volcanic spurts that dot the waves.[23]

Time also seems to be in trouble, as people, locations and objects from the plane's past seem to appear and disappear on their own.[24] Teferi returns from his phased-out home and upon seeing the destruction realizes that the connection between land and mana is breaking. He seeks the help of Freyalise to repair the plane.

Several rules changes accompanied the release of Time Spiral. Most of the returning mechanics received at least a small update (such as Echo now specifying a cost instead of using the mana cost of the permanent by definition). In addition, the rules governing cards without mana costs were changed to allow a cycle of spells only playable by the Suspend ability, and a new rule was created causing +1/+1 and -1/-1 counters on the same permanent to eliminate each other in order to avoid confusion.

The theme of the expansion is the past.[25] Many mechanics and themes that appear in Time Spiral also appeared in past expansions.[26] These include the keywords buyback,[27] echo, flanking, flashback, madness, morph,[28] shadow,[29] and storm. Returning creature-type themes include rebels, slivers, spellshapers and thallids.[30] Two new time-related mechanics were introduced in this expansion, namely split second and suspend, and additionally flash was keyworded. Another theme is the "timeshifted" cards, each of which is a reprint of a card from Magic's past and features a special purple rarity symbol. Alongside the direct reprints of old cards, there was a cycle of 'callbacks'; cards that had the same effect as extremely powerful older cards but which could only be played by suspend and never directly cast.

The following creature types are introduced in this expansion: Assembly-Worker.

The preconstructed theme decks are:[40]