Time Spiral Remastered is the first remastered Magic: The Gathering set to appear in paper.[3] It was released on March 19, 2021.[4][5]

The design of Time Spiral Remastered predates the digital Amonkhet Remastered and Kaladesh Remastered, and was mostly inspired by Tempest Remastered.[6]

The 121 timeshifted cards of this set are a specific selection of cards similar to the original Time Spiral "outside the set and outside of time" timeshifted cards.[7] The timeshifted cards feature modern cards in a retro (pre-Modern) card frame and with a purple expansion symbol. Premium foil versions also have the "shooting star" watermark used on pre-Modern set foils. These cards are numbered #290 to #410. 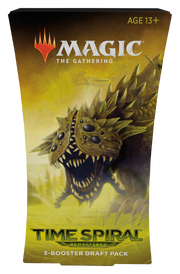 Time Spiral Remastered will be sold in regular 16-card Draft Boosters (one card being a marketing card).[9] These are the only sealed products available for the set — there are no Collector, Set, or Theme Boosters. The boosters feature artwork from Serra Avenger, Sidewinder Sliver, and Stuffy Doll. The Draft Pack (a packaging of three Draft Boosters) features Tarmogoyf key art.[10]

Time Spiral Remastered features fifteen tokens.[12] Some of these tokens had been created for Magic Online,[13][14] but are now printed for the first time.

In addition, there are multiple mechanics appearing on just a few or even a single card, as references to specific cards from Magic's past, or from "futureshifted" cards. These include absorb, buyback, convoke, cycling, delve, hellbent, kicker, madness, poisonous, storm and transmute.

Time Spiral Remastered has seven cycles, including one vertical cycle.

Changes in rarity, compared to their printings in the original Time Spiral block.