Torbran, Thane of Red Fell is a Dwarf Noble from Eldraine.

The majority of dwarves are put off by the hierarchy and stuffiness of the human courts and prefer to live out in the wilds. For a few individual dwarves, the fearless camaraderie of the Court of Embereth appeals to them. These dwarves, driven by the independence so valued by their clans, sometimes pack up for a few years to compete at the Burning Yard, often bringing with them dwarf-forged armor and weapons that give them an edge in combat.

One such dwarf was Torbran, the current Thane of the dwarvish clan of Red Fell. As the story goes, Torbran traveled to Embereth in his youth to compete for knighthood. Though he defeated each foe he faced, when the time came to claim his prize and strike the Irencrag, Torbran refused. According to him, the Irencrag had insulted the craftsmanship of his weapon in its taunts (which would be quite a personal offense in dwarvish culture). Unwilling to give the stone the satisfaction of tasting his blade, Torbran left Embereth and returned to the Wilds. Some in Embereth consider Torbran a coward for leaving, but many others believe that Torbran will one day return to claim his rightful knighthood. They believe he has spent the past few decades crafting a weapon of such quality and power that it will strike fear into the Irencrag itself.[1] 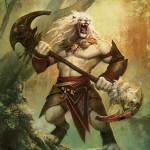