A Tutor is a spell which searches your library for another card.

Tutoring is primary in black, but other colors can be better at searching for specific card types (and subtypes).

You do not have to find the card and put it in your library. If you do choose to find cards, you must reveal those cards to all players if it searches for a specific card type.

R&D has stopped creating tutoring keywords like transmute and transfigure.[1] They don't like to do too much tutoring, as it can lead to repetition of play, where games play out too similarly.[2][3] Lands are exempt from the repetition angle, but not the shuffling and logistics problem. However, the seek mechanic from Jumpstart: Historic Horizons is designed-for-digital and circumvents this.

A special kind of tutor are the wishes, which may search for cards outside of the game.

To cut down on shuffling, R&D has started to do more effects where you "tutor" just from a handful of cards from the top of your library, usually four or five. Anything else that colors can do is what they can do here.[4][5][6] 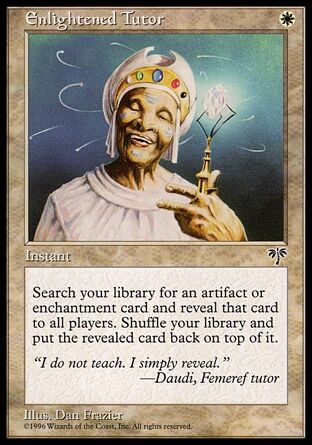 Search for any card[]

Alpha had the card Demonic Tutor, which locked black in as the primary color to tutor for any type of card. Philosophically, blue is the better color to have this ability, but so far no changes have been made.[4]

Blue is the primary color to get any type of artifact. White tends to focus on certain subsets such as Equipment and Vehicles.[4]

White is the color that searches the library for enchantments.[4]

Green is the primary color to tutor for creatures.[4][9][10] Sometimes it will even put them directly onto the battlefield. All colors have access to tutoring for specific creature types that are in their color. Red, for example, can tutor for Dragons.

Green, being one of the colors most closely associated with land and mana, is the best at tutoring for land.[10] It occasionally will put them directly onto the battlefield. The other four colors are allowed to occasionally tutor for their own basic land type.[4] Lately, white is getting more tutoring for a plains as a catch-up feature when it's behind on land.[8]

Search for instants and sorceries[]

Instant or card with flash[]

Search for a legendary creature[]

These cards are all from Planeswalker Decks and search in the library or in the graveyard for the related planeswalker.

Search for a copy[]

These cards let you search for a card with the same name as another one.

These old cards have had errata removing the word "copy" since they're not copies in the usual sense.

Cards that were named and noted down during a Conspiracy Draft.