Ultimate Masters is a booster-based compilation set that was released on December 7, 2018.[3][4] It was designed to be drafted and was meant to be the conclusive celebration of twenty-five years of Magic: The Gathering. 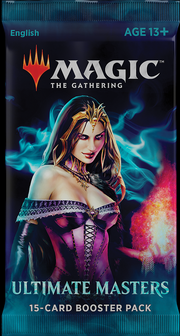 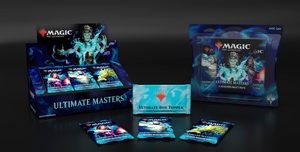 Ultimate Masters contains 254 cards (101 commons, 80 uncommons, 53 rares, 20 mythic rares) and includes randomly inserted premium versions of all cards. The product contains cards from across Magic's entire history with some of Magic's most popular cards. Every booster box of Ultimate Masters contains 24 booster packs—each with fifteen randomly inserted game cards, including one premium foil card in every pack. The sixteen-card boosters (the sixteenth card is a marketing card) feature artwork from Liliana of the Veil, Karn Liberated, and Vengevine. The set will be released in English and Japanese.

This set was said to be the last Masters series set "for the foreseeable future".[5] However, Double Masters would be released less than two years later.

Each booster box came with a random semi-borderless foil box topper, each being available as regular card in the set, too.[6] There is a total of 40 box toppers.

Ultimate Masters released on Magic Online on December 7, 2018, the same day as the paper set. Box toppers were distributed by Treasure Chests.

Ultimate Masters was originally designed as a graveyard-themed set, nicknamed Immortal Masters. This theme is still present in the set symbol and in promotional text on the booster boxes.[7] It has fourteen returning keywords.[3] Every color in this set has multiple cards that care about the graveyard in some way, providing resources for delve, flashback, and dredge in blue, black, and green.[8] White and red see the return of the heroic mechanic from Theros. In addition, white has a heavy Aura subtheme, and madness is prevalent in red.

It was discovered that the packaging of the box topper of each box of Ultimate Masters is semitransparent, making the top card easily visible in certain light and angles.[11]