Unglued was the first Magic: The Gathering supplemental set to be used outside of normal Magic expansions.[2] It was released on August 11, 1998 as a standalone, fun set.[3][4][5][6] 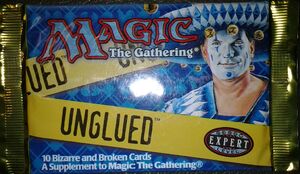 The set included 83 silver-bordered cards, five black-bordered cards (basic lands) and six tokens. The lands are special full-art lands which have extended artwork inside an oval frame stretching from the top to bottom of the card.[7] On top of that oval frame is a round gem of the appropriate color with the (at the time current) tap symbol. At the bottom is a slightly larger gem featuring the appropriate mana symbol. The top left corner has the name of the basic land while the bottom left corner simply reads "Land" with Artist and copyright information as well as collector number running along the bottom. Unlike other sets that feature up to four distinct arts per basic land, Unglued only has one art per basic land.

The rest of Unglued are silver-bordered joke cards which are still functional. Names, flavor texts, types and mechanics as well as the art featured on the card[8] parody the game, individual cards, concepts, the history or players of the game. Unglued and its followup Unhinged are also the only sets in which the artwork of non-Planeswalker cards extend outside the art frame. The card B.F.M. (Big Furry Monster) even extends over two cards. Some cards have specialized frames allowing for other jokes. Unglued also makes special mention of Chickens and Clamfolks as creature types. Chickens were a minor theme.[9]

While Unglued dabbles in all sorts of mechanics including physical actions by the players, specifically noted should be the usage of six-sided die on cards for random effects.

Many graphic design elements that first appeared in this "joke set" have crossed over into tournament-legal Magic releases. These include full-art basic lands, art extending beyond the frame (as seen later on many planeswalker cards), watermarks in the text box, and sideways printing (first seen in Burning Cinder Fury of Crimson Chaos Fire and later on split cards).

Unglued creature types were eliminated from the Comprehensive Rules list during the Grand Creature Type Update. They included:

The following list is every Unglued card that inspired a black-bordered card or mechanic.[27]

A follow up set, tentatively called Wacky II: This Time it's Personal or Unglued 2: The Obligatory Sequel, was announced for Summer 1999 but never got made. This was an entirely different set from Unhinged and featured animated vegetables, punny Djinni, Santawar Elves, and an alternate take on Serra Angel.