This user "LegacymtgsalvationUser1033" prefers to use the enhanced profile. 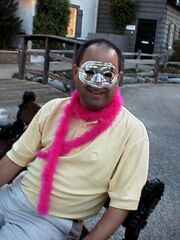 On July 26, 2007, GeoMike and MORT were added as MTGS Wiki sysops after the retirement of VestDan.

GeoMike is Mike from Georgia, hence his handle "GeoMike". He started playing when Fallen Empires was selling, and is a Magic player and collector. He has a large collection, and tries to collect a playset — 4 — of everything (excluding the expensive early cards).

Articles I don't know what to do with[edit | edit source]

Good page with comprehensinve rules and an example in the rules, follow its syntax.

External links (that I have used)[edit | edit source]

Example — This is an example of the "Example" template.

10th Edition Theme Deck: Molimo's Might — Wizards of the Coast