Vannifar is the current guildmaster of the Simic Combine, and speaker of Zonot Three, on Ravnica.[1]

Vannifar considers herself a superior life-form: an elf whose extensive self-experimentation has mutated parts of her body into proto-plasmic ooze,that gives her a jellyfish look. She believes that she embodies the Simic's utopian ideals, and the work that transformed her could never have occurred through slow, incremental progress like the Utopians advocate. Only bold and decisive action could create such a being, who absorbs nutrients and oxygen through her membranous skin and rests parts of her brain at different times so she doesn't need to sleep.[2] 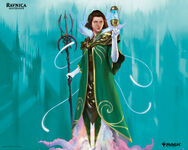 Until quite recently, Vannifar was an outsider and iconoclast, considered a worthy counterbalance to the weight of Zegana's ideas, but not really a respected voice within the guild. As speaker of Zanot Three she was one of the founding thinkers of the adaptationist movement, believing that the Simic mission had taken on a more urgent dimension in an unstable political climate. This led her to more directed experimentation on sapient beings, to make a better Ravnica, she argued, first make a better Simic. The emergence of the Living Guildpact led many to believe that a new age of stability was dawning, and Vannifar's faction lost a great deal of influence. Vannifar herself retreated to Zanot Three to continue what she still saw as a pressing matter of guild survival. She stopped coming to the Simic guildhall and pushed the bounds of legal experimentation. About a year ago, Zegana had to summon Vannifar to Zanot Seven for a reprimand before the Speakers' Chamber. But the Living Guildpact proved to be an unreliable agent of peace on Ravnica, as often missing as being present, and tension mounted among the guilds. Vannifar slowly regained influence. Matters came to a head when Zegana again summoned her to the guildhall, this time to grudgingly ask for her help in quickly deploying new life-forms to defend Zanot Four against Golgari incursion. Vannifar went further than that. Before the Speakers' Chamber, she made Zegana's leadership the subject of open debate. A vote was called, and Vannifar was made the new Prime Speaker. Under Vannifar's leadership, the entirety of the Simic Combine has aligned with the adaptationists. Some Utopian experimentation continues, but the majority of the guild has been turned to more urgent work.[2] 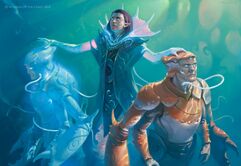 Deep within Vannifar's home zonot of Zonot Three lies the laboratory of Navika, the hub of the Guardian Project. Lit by bioluminescent glow, the lab was built into, or possibly grown in the shape of, an enormous nautilus shell. Even within the guild, Navika has a mysterious and slightly sinister reputation as a place where Vannifar's elite biomancers push the boundaries of the law, biology, and ethics in the name of adaptation. Most Simic have never even seen Navika, and even fewer been inside. The work of the Guardian Project, authorized by Prime Speaker Vannifar, is the creation of increasing numbers of sapient humanoid hybrids intended to form an army of highly evolved soldiers. Each of these hybrids is a different fusion of humanoid characteristics with a mix of traits from other species. The traits vary considerably, though all are meant to confer some advantage in battle: camouflage, gills, wings, claws, and carapaces are among the most common improvements. These [[mutant|hybrids], sometimes called guardians after the project that created them, are seen as essential to the guild's survival, though no one is sure what will become of them when and if the current crisis passes. The first successful result of the Guardian Project was Roalesk.[2]

Under Vannifar the Simic started to mutate their more intelligent members into super soldiers.[2] During the War of the Spark, the Simic participated in the guild meeting after the Elderspell was cast, and Vorel was sent as a representative for Vannifar.[3] Vorel told Ral Zarek that Vannifar was a fighter and had been preparing for war long before Bolas was known to be a threat. Ral then wondered the obvious question of who exactly was Vannifar preparing to war with before Bolas.

The Simic were loyal allies in the War, and afterward, Vannifar served as the representative for the guild at the resurrection of Niv-Mizzet as the new Living Guildpact.[4]