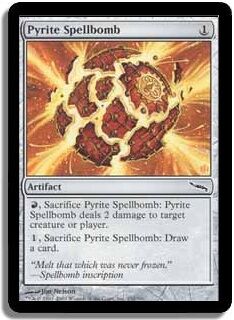 The Vintage Bomberman Deck is a combo-control deck in the Vintage format.

This deck's combo makes use of Auriok Salvagers, Black Lotus to make arbitrarily large amounts of mana in any color, and then reoccurs either Aether Spellbomb or Pyrite Spellbomb to draw as much as it needs to, bounce all the opponent's threats, or just burn them out. Alternatively, this deck can just get the combo on the field, bounce all the opponent's creatures, and then attack with 2 power creatures. Later versions included both the Tinker/Darksteel Colossus combo and Pyrite Spellbomb to win.

A sample decklist by Juan Rodriguez who placed 4th in a Star City Games Power Nine tournament in June 2007:

2 Sword Of Fire And Ice