Visions is the tenth Magic expansion and was released on February 3, 1997 as the second set and first small expansion in the Mirage block. 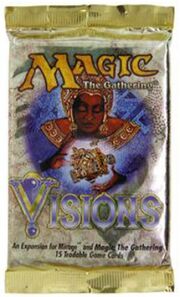 At the time of its release, Visions was a "first" in the release of quality cards at the common level; examples include Uktabi Orangutan and River Boa. River Boa (at that time) was considered "very good", with two abilities (islandwalk and regeneration), and a 2/1 at only

Visions was the start of increasing the speed of red decks. Red decks began to get faster due to a card from Visions: Fireblast. In the late game, players could now sacrifice two Mountains to deal four damage to opponents. This proved to be essential as burn decks became all the rage. Decks were sporting "pure burn", essentially: four Lightning Bolt, four Incinerate, four Fireblast, which made it very easy for the red player to deal twenty damage to their opponents, or in today's colloquial, it "increased the reach" of the red player. Fireblast was also common rarity.

The Visions set was the first set to introduce the color-appropriate text boxes to non-basic lands capable of producing single colors of mana, such as Karoo, Everglades, and Jungle Basin, that had been used for basic lands since the launch of Magic the Gathering. Non-basic lands capable of producing more than one color of mana did not receive color-appropriate text boxes until Invasion (excepting the early Dual Lands which had their own unique box-in-box color design). The Visions non-monocolor lands share the same dull green text box color that Mirage has, and the monocolored lands still had text box frames of that same color. From Fifth Edition on, land text box color was standardized.

Visions was advertised as an expansion to the stand-alone Mirage set as well as to the basic set. The set was released in February 1997. The cards were sold in 15-card boosters which had artwork from Teferi's Puzzle Box. Each booster box contained 36 sealed packs. Visions was the first set to have a wide dispersal of pre-releases.

The story continues the struggle between the nations of Jamuraa against the evil Kaervek, only now Femeref has been destroyed and Suq'Ata and Zhalfir begin to have internal problems as well.[4] There is hope, however, when Kaervek's ally Jolrael betrays him at the urging of the planeswalker Teferi. Jamuraa's leaders, led by Jolrael's visions, free Mangara from the Amber Prison and begin to fight against Kaervek.

Wizards of the Coast started selling Visions cards and preconstructed theme decks for Magic Online on April 10, 2006. The cards became legal to use in several formats as they went on sale. Official release events were held on April 13, 2006.[5]

Visions included many creatures that had abilities that triggered upon entering the battlefield. This meant that some creatures could now do things normally reserved for instants, sorceries, or costly activated abilities. These "enters-the-battlefield" creatures could also combo well with cards that returned creatures to a player's hand.

The Visions expansion originated as a split from “Menagerie” (the original name for Mirage), which had grown too large for a single set. For a brief time during its development, Visions was known by the codename “Mirage Jr.” It received its final name shortly later.[7] Mark Rosewater was instrumental in determining the power level of Visions in the last development meeting.[8]