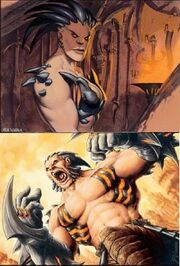 A human ethnic group, the Vulshok are primitive mountain barbarians and sorcerers who live in the Oxidda Chain on the plane of Mirrodin.[1][2]

The Vulshok trade weapons with other races and have more or less amiable relations with the goblins of the Krark Clan, but seem to have a somewhat heated relationship with the humans of the Auriok tribe. The Vulshok are the preeminent blacksmiths of Mirrodin; they salvage iron from the rich mountains of their home, as well as from artifact creatures such as myr, to create weapons and armor of great quality. The Vulshok are also renowned sorcerers specializing in battle magic, such as offensive bolts of lightning, magnetic weapons that return to their owners, or the summoning of hostile elementals. The details of their religion are unknown, but they perform fire rituals in remembrance of the rising of their world's red sun.

Many Vulshok of both sexes are large and powerful, with muscular frames and thick, tanned skin. Dull iron spikes jut from their heads, shoulders, and other parts of their bodies, giving them a degree of natural armor. Their hair, if they have any, resembles flexible metal wire. Vulshok wear little clothing, usually only iron-studded tunics or loincloths.[3]

Tribes of the Vulshok[edit | edit source]

The Vulshok are divided into six tribes, and after the Vanishing, they put their differences aside. Each tribe fulfilled a role in Vulshok culture, the Anvil making the weapons, the Helm providing leaders, the Spear specializing in magic, and so on. However, after the Phyrexian corruption began to seep into the ore of the mountains, the balance of the tribes was upset. Civil war broke up once more among the barbarians, and only the act of the new Vulshok leader, Koth could restore their fragile peace.