Warrior is a creature type and class.[1] Warriors are part of the party. 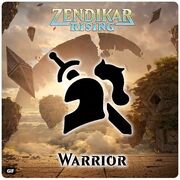 Warriors are combatants who fight alone or in loose hordes.[2] Unlike soldiers, whose strength is in their numbers, a single warrior is often content to take on the world all by him- or herself. Warriors favor brute strength over cunning, sheer will over tactics. Many warriors have trample.

The first card to feature the type was Cat Warriors from Legends. Retroactively, many cards like Dwarven Warriors, Goblin Balloon Brigade and Orcish Artillery from Alpha gained the type, as well. Most warriors are black, red, or green.[3][4] However, some worlds have White warriors, such as Amonkhet, Tarkir, Kaldheim and Zendikar specifically in Zendikar Rising.

Morningtide featured Obsidian Battle-Axe, an equipment that equips for free on Warriors if they just entered the battlefield.

Warriors are also created by:

In the Grand Creature Type Update the subtype Stangg-Twin for a token created by Stangg was changed into a (Human) Warrior token "named Stangg Twin". The subtypes Raider (Erg Raiders) and War-Rider (Varchild's War-Riders) were incorporated into the Warrior class as well.