Edit this Page
watch 02:56
Raise a Floppa - The Loop
Do you like this video?
Play Sound
Weatherlight
Theme decks

For the most powerful of the Legacy artifacts, see Skyship Weatherlight

Weatherlight is the eleventh Magic expansion, released in June 1997 as the third set and second small expansion of the Mirage block. Weatherlight also marked the beginning of the Weatherlight Saga, the most important Magic storyline, which continued through 2001.[3]

The set contains 167 black-bordered cards (50 rare, 55 uncommon, and 62 commons). Its expansion symbol is the Thran Tome, an important artifact of the Legacy whose contents change depending on who reads it. Among the information contained in the Tome are the components and intended operation of the Legacy itself.[4]

The set was sold in booster packs containing 15 cards (1 rare, 3 uncommon, and 11 common). All boosters featured the same artwork from the card Steel Golem. While previous sets only included allusions to an overarching story, Weatherlight was the first set to explicitly tell an ordered narrative focused on developed, archetypical characters. The new approach to designing and marketing Magic proved to be a huge success both popularly and commercially. Weatherlight also set the stage for the books of the Rath Cycle storyline.

Four thousand years after Urza and Mishra reopened the portal to Phyrexia, the evil lord Yawgmoth sits poised to invade his one-time home - Dominaria. The plane's only hope for survival is a cache of powerful artifacts known collectively as the Legacy. When put together to assemble a powerful doomsday weapon, these artifacts will have the potential to destroy the dark powers that will try to invade the planet. The focal point of this weapon is a flying ship called Weatherlight, and its intrepid crew searches the planes to find all of the pieces of the Legacy before the invasion commences. Only the reluctant leadership of Gerrard Capashen and the skills of Squee the cabin boy and Tahngarth the hulking minotaur will save the day. It doesn't help that captain Sisay has been kidnapped, and they have to travel to the plane of Rath to save her before they can complete their destiny. And Gerrard, of course, will have to live up to his own overwhelming responsibilities by facing his blood brother Vuel, who has changed his name to Volrath and sold out any semblance of goodness he had by becoming Yawgmoth's first in command.

Weatherlight was designed completely independently from the group that designed Mirage and Visions, but it was decided for coherency to use elements of the earlier two sets to make the third set feel like part of the block. However, the Weatheright design team embraced a theme that had nothing to do with the previous sets; it is the first set where the graveyard is strongly mechanically relevant.[6]

The following cards were reprinted in Weatherlight from Portal. 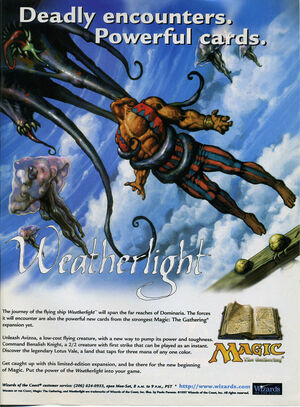 Paper versions of Weatherlight theme decks (also known as precons) do not exist because the concept of theme decks was not implemented until the next block (Tempest block) was released. Weatherlight precons were designed retroactively for the MTGO release of the Mirage block sets in 2005, nearly a decade after the set was released in paper.