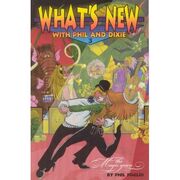 What's New with Phil & Dixie was a long-running fantasy gaming comic by writer/artist Phil Foglio that was published in The Duelist for most of its run.

First appearing in Dragon Magazine #49 (May 1981), the comic revolved around two gamers - Phil, a caricature of the author, and his partner Dixie Null - as they lampooned new or popular role-playing or miniatures games, mainly Dungeons & Dragons. What's New was discontinued three years later, but was revived in the early 1990s with the release of the official Magic: The Gathering magazine, The Duelist, where its focus shifted to collectible card games, including Magic. After ending its run in The Duelist, What's New returned to Dragon (which had since been acquired by Wizards of the Coast) and returned to its RPG roots. Its run ended in 2003, though a final comic was published in Dragon's last print issue in 2008.

Since 2007, What's New has been reprinted as a webcomic hosted on Phil Foglio's website.