Will Kenrith is a planeswalker who specializes in ice magic. He is the twin brother of Rowan Kenrith. His other siblings are Erec and Hazel, his father is High King Algenus Kenrith, and his stepmother is Queen Linden.

The young warrior-mage twins, Rowan and Will Kenrith are unique among planeswalkers in that they share a single planeswalker's spark.[2][3] Rowan, bold and impetuous, augments her swordplay with crackling electrical energy that dances along her blade, while Will, reserved and contemplative, uses his power over ice to control the flow of a fight. They often coordinate their magic to make it more effective.

Will's easy acquiescence during his youth made everyone think he was the obedient twin while Rowan was the headstrong, insubordinate one. The misapprehension gave him a lot of space to do what he wanted, which was to seek out secrets he could someday trade to the mirror at Castle Vantress in the hope of winning knighthood there. At Vantress he aspired to study and learn to his heart's content.

Together the twins travel from plane to plane, following the knightly virtues with which they were raised in pursuit of achieving the most good. Like his twin, he is cursed from birth.

Will Kenrith is centered in blue mana.

Will and his twin were born after a witch had enthralled their father and lived with him for a year. Their birth-mother killed the newborns for their blood, which she would have drunk to extend her life. When Algenus regained his conscience, he killed the witch. At the same time, their adoptive mother gave up her sword's power to restore life to the twins and took them in as her own children.

At seventeen, Will experienced a vision in a sheet of ice.[4] He saw a dragon’s skull as tall as a house blocking a forest path with its bony jaws gaped wide open and seen deep down the dark tunnel of its jaws a figure obscured by shadows crouched on a massive branch. As if hearing a cry, the faceless person scrambled down a rope ladder that descended past branches and more branches until it seemed only this vast tree existed in all the world. The vision rippled again to gleam with a host of brightly armored knights as they spread shining wings and rose into the teeth of a mighty wind. But the dazzling beauty of the wings faded, sucked away until nothing was left except a spear so black it absorbed all light, all existence. 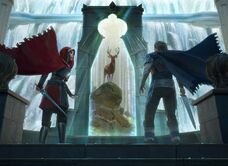 Indrelon shows where the father of twins is.

This vision later came true when the twins visited an amphitheater made of a petrified dragon in the Wilds. They experienced the machinations of the planeswalker Oko, and they witnessed the tribute of the Ardenvale griffin-knights after the death of their father.

Eighteen years old, the twins' quest for their missing father, the High King, who has been abducted by the planeswalkers Oko and Garruk Wildspeaker. Indrelon, the Magic Mirror, reveals the location of their father and that he has been transformed in a stag.[4] Later on, Will rescues Garruk from certain death. His act of braveness and persistence summons the Cauldron of Eternity, which cures the hunter of the Chain Veil curse. The twins fail to protect the stag from the Wild Hunt, but Algenus is brought back to life by his wife Linden. This all happens near a witch's cottage at the fringe of the Wilds, which was actually the house where the twins had been born. As Linden reveals the shocking truth about their origins, Rowan becomes upset that they hadn't been told earlier. The shock ignites the twins' planeswalker's spark and they disappear. Garruk, who is thankful for his cure, promises the King and Queen to track their children and to keep them safe.

Will competed with his sister at the stadium of Valor's Reach on Kylem. No one knew where the mysterious pair came from, or why they felt the need to test themselves on Valor's Reach. But anyone who faced them in battle realized very quickly that their ability to reinforce each other's powers was a force to be reckoned with.[5] The twins were champions of Valor's Reach.

The siblings were invited to join Strixhaven as students by Kasmina.[6] While Will fitted right in, Rowan had problems to adjust. Moreover, she seemed to lose control over magic, often crackling with electricity when she lost her temper. Their arguments became a full-on quarrel before they were stopped by Professor Onyx. She had noticed that they were planeswalkers, and tasked them with coming up with a defense against an Oriq attack. While Will studied the books, Rowan tries to gain more power.[7]

In the video game Magic: The Gathering Arena, the voice lines of Will in The Royal Scions are voiced by Billy Boyd.