For the company, see Wizards of the Coast.

Wizard is a creature type introduced in Alpha with Prodigal Sorcerer. It is the primary blue spellcaster. Wizards are part of the party.

Wizards are masters of channeling mana into powerful spells.[1] They are ubiquitous throughout the known multiverse and are known to nearly every race.[2] Wizards come by their powers in different ways:[3] Some study for years on end to unlock the secrets of magic, while others are just born with the knack. Some wizards come together in huge schools or guilds to pool their resources and train neophytes. Wizards range across all five colors but are concentrated in blue, the color of knowledge. In the game, the color blue contains more wizards than all the other colors combined. The distant second color for the most wizards is black followed closely by white. In recent years red has picked up many Wizards instead of Shamans, its typical spellcasting type. In the Grand Creature Type Update the subtypes Mage (Musician), Sorcerer (Ovinomancer), Sorceress (Sorceress Queen) and Witch (Cuombajj Witches)[4] were incorporated into the Wizard class. On Kamigawa, wizards are known as jushi. 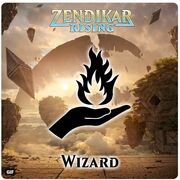 In contrast to shamans or druids, wizards take a methodical approach to magic. And while priests and clerics power their spells with their faith, wizards need years of practice to master their spells. Wizards are more versatile than simple spellshapers. Given the intense study that wizards often engage in, it is no surprise that various mystic disciplines have become recognized as independent of each other, although it is not unheard of, especially for planeswalkers, to practice multiple disciplines — Jace Beleren, for example, is both an illusionist and a mentalist. They include the following:

Plane of Mountains and Seas

Morningtide featured three tribal Wizard cards, which were cheaper to cast with a Stonybrook Banneret in play: