Xenagos was a satyr planeswalker from Theros. He used to be the lord of Skola Valley and was known at large as "King Stranger".

He appeared as a muscular young satyr with long brown hair and beard, brown fur down his hooves, two pairs of horns. as well as markings along his body with what appears to be red war paint.

Xenagos was centered in green and red mana.

Xenagos's history of violence and ego began before he was even born, slaying his twin sister while they were each still in the womb. In time, his mother, Raissa, would give birth, knowing that Xenagos would bear a fate destined to be something special. Unlike the others of her kind, she stayed and attempted to raise the child that she knew was fated for something great.

It was a terrible decision.

Xenagos displayed a wanton disregard for life, killing another child and leading Raissa to flee with her child from Setessa. It did not stop there though. At six, he began to attempt to murder his own mother. He seemed impressed by her ability to overcome his repeated attempts on her life, but all Raissa desired were answers. The answers she got were confusing and terrifying, as she saw visions of her son rise to challenge the gods themselves.

Like the rest of his kind, Xenagos led the life of a hedonist, reveling in a carefree life of pleasure without inhibitions. At some point, this lifestyle led to his ascension, his spark igniting during the Bakkeia.[1] Xenagos took advantage of his newfound status and perspective, engaging in revelries elsewhere in the Multiverse and enjoying the new pleasures available to him, but soon he was aware of a grim reality: that he, ultimately, was utterly insignificant in the grand scheme of things, and that the gods' reach was meaningless outside of Theros. Following the trauma of this revelation, and disillusioned with the meaningless hedonism, the satyr became progressively more ambitious. 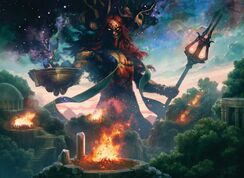 Sometime later, Xenagos returned to his birthplane, finding his old hedonistic lifestyle exceedingly dull and the gods to be a farce in which he was no longer willing to participate.[2] His ambitions had evolved into a desire for outright godhood, to join or replace the pantheon of Theros, and so he began gathering his forces of eldritch, otherworldly monsters to attack the poleis of Meletis, Akros, and Setessa. These attacks became so severe that the gods themselves began to go blind, cut off from their oracles. This drove them into a panic which escalated as they blamed the others of their kind for the transgression. Only Nylea seemed to be aware of the threat he played, but with his otherworldly magic, none of the gods could truly stop him.

In circumstances largely under mystery, he gained knowledge that the Gods power stemmed from the devotion of their followers. Gaining enough devoted followers, he managed to ascend to godhood. This occurred during a minotaur siege at Akros, battled off by armies led by Elspeth. The victory celebration was the final ingredient to Xenagos' divine ascension, and in the ensuing turmoil, the Sun god's champion was ironically scapegoated for this, resulting in her exile to the wilderness. Xenagos held the position of the god of the revels, furthering the chaos and distrust of the established pantheon.[3] Heliod was particularly offended by his ascension and sought to destroy the satyr, whom he refers to as "the usurper". He planned to punish all of mortal-kind for the actions of the new god.

Xenagos had accomplished what he had desired: obtaining a place in the pantheon. However, he could not sustain his godly form by himself; he gathered a large array of Nyxborn creatures, using them to keep his position. Capturing the Nyxborn caused Theros's sky to darken, as chaos spread across the plane. His stay in Nyx would not be a long one, though. Only a couple days after his rise, Elspeth and her friend Ajani arrived in Nyx to set Theros right again. After a difficult battle, Xenagos managed to knock Elspeth down, planning on taking her weapon, Godsend, to keep his position firm. However, Elspeth managed to throw the spear into Xenagos's chest, causing the arrowhead, which Nylea had shot into Xenagos before his ascension, to explode, tearing Xenagos's organs into shreds. As Xenagos died in Nyx, he is not even in the Underworld and as such, he is truly gone.[4]