Zegana is a stately and reserved merfolk wizard from Ravnica. She is the current Speaker for Zonot One and previously spoke at the discretion of the Speakers' Chamber, fulfilling the role of guildmaster of the Simic Combine. She upheld the traditional way of the guild and its utopian philosophy.

Some believed Zegana actually controlled the Chamber. She delivered the Fathom Edict,[1] which declared a new beginning for the Simic Combine, after the fall of Momir Vig.[2]

When some people of the guild, members of the Adaptionist faction argued that her ways were outdated and the guild required more practical leadership,[3] Zegana stepped down in favor of Vannifar. She returned to Zonot One and has been a vocal advocate for the Utopian movement ever since, opposing Vannifar's more extreme initiatives and engaging in outreach to other Ravnican guilds.[4] She is hoping her niece Kaszira will be able to help unite the factions in the future.[5] 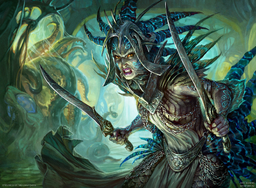 Regal and reticent, Zegana always maintained that she served as Prime Speaker only at the sufferance of the Speakers' Chamber. The chamber, she said, could revoke her status at any time and appoint another of their number prime speaker. Even within the guild, some believed that she had far more influence than she let on and that the speakers would not or could not remove her. Outside the guild, some expressed doubt that the Chamber met at all. In fact, Zegana meant every word of it. although she believes Vannifar's rule a dangerous experiment, she accepted the chamber's judgment and yielded her place. After her ouster by Vannifar, Zegana returned to the seclusion of Zonot One, which is the smallest zonot and has always tended to keep quiet. She did not remove herself from public life, however. She has been a vocal advocate for the Utopian vision, opposing Vannifar's more extreme initiatives and engaging in outreach to other guilds. The remaining Utopians in the guild have clustered around her, but by nature, their work is both quieter and slower than the Adaptationists. If Vannifar goes too far, Zegana will be there to make a case to the Chamber that the prime speaker should be removed. Until then, she seeks to curd Vannifar's excesses and guard against her failures.[4]