For other uses, see Zendikar (disambiguation).

Zendikar contains 249 cards (101 Common, 60 Uncommon, 53 Rare, 15 Mythic, 20 Basic Lands), including randomly inserted premium versions of all cards in the set. The expansion symbol of the set is a closed hedron.

Zendikar is the "land set"; it is centered around lands and players' interaction with lands.[4][5] Besides Landfall and enemy fetch lands, the set features special full-art basic lands similar to those that appeared in Unglued and Unhinged. The lands have a regular name box but the mana symbol of the text box and the type line are conflated into one at the bottom of the card. The box is the normal height of the type-box but dents outwards for the mana symbol in the middle. To the left of the symbol are the words "Basic Land" while on the right is the type of the land and the expansion symbol. These special lands appear in booster packs and fat packs. Intro packs on the other hand have normal styled lands as they have appeared in the majority of large expansions. These have the same collector numbers, but with an added letter "a". There are four individual arts for each land and both sets of lands feature the same artwork.[6][7][8][9][10] Full art basic lands function the same way as any other basic lands, since each land with a basic land type intrinsically has the mana ability associated with that type. The set features new planeswalkers, including Nissa Revane, who was previously featured in Duels of the Planeswalkers.[11]

Zendikar is based on the plane of the same name which had not been featured previously in Magic, but had been alluded to within the planeswalker novel of The Purifying Fire. It is a plane of adventure, many treasures, and potent mana supplies, but mana on this plane works differently than in the rest of the multiverse.[12][13] The plane is littered with large, floating polyhedron-shaped stones called hedrons, prominently featured in the artwork. Little is known of these Hedrons as not even the people native to the plane know about their purpose. The floating stones however are also an indicator of the fact that gravity is different on Zendikar than on other planes.[14][15]

Zendikar is populated by Goblins, Elves and Vampires among others. Zendikar is also the home plane of the Kor and as such they are predominately featured as the race for white in the set. It is revealed that their appearance on Rath and other planes is due to abductions from Zendikar.[14]

As a promotion to further the theme of the set, Wizards randomly inserted cards from older sets into Zendikar boosters replacing the basic land slot.

These cards are mostly from Beta, Unlimited, Antiquities, some of them are signed cards. Cards from the Reserved List are not excluded as these cards are not reprints but are existing copies from the old print run and therefore do not violate the policy. However, due to legal issues, ante-related cards do not appear as Priceless Treasures (Chaos Orb and Shahrazad, both banned in Vintage, did appear however).

Priceless Treasures include reserved cards like Power Nine-members and dual lands, cards not on the reserved list but not reprinted otherwise by then like Sol Ring are also included. Despite appearing in the boosters, cards from Priceless Treasures are excluded in limited play, nor did they become legal in Standard, Extended, or Modern. 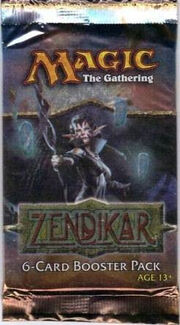 Zendikar was sold in 16-card booster packs, 6-card boosters, 5 intro packs [16] and a fat pack.[17] It was the first large exansion to be sold without tournament packs. The regular boosters featured art from Ob Nixilis, the Fallen, Vampire Lacerator, Nissa Revane, Chandra Ablaze and Sorin Markov.[18] The 6-card booster featured Nissa Revane. The Zendikar block was accompanied by only one novel: Zendikar: In the Teeth of Akoum, written by Robert B. Wintermute.

Prerelease events were held September 26–27, 2009. Release events were held October 2–4, 2009. Zendikar Game Day was held October 31, 2009. The promotional cards given to participants at the prerelease are Rampaging Baloths, highlighting landfall, with alternate artwork and the Celestine Reef plane card for use with the Planechase set.[19] The release card for the launch party was Valakut, the Molten Pinnacle, which rewards you for playing multiple mountains. The promotional cards given to Game Day Event participants was a full-art Nissa's Chosen, winners received a foil full-art Emeria Angel.[20] The Buy-a-Box card was Day of Judgment.

Regular boosters of Zendikar come with a bonus sixteenth card that is either a "tips & tricks card" or a creature token from Zendikar. One face of the Zendikar bonus card has one of five different rules tips or is one of eleven different creature tokens. The other face has one of 13 advertisements for organized play programs, Worldwake, Duels of the Planeswalkers for Xbox Live, Magic Online, fat packs, A Planeswalker's Guide to Alara and Ultra Pro products for Magic.

The Zendikar tokens in numerical order are:[21]

The ability word Landfall signals triggered abilities upon lands entering the battlefield under a players control.[23][24] The set also prints a cycle of enemy-colored fetch lands which support the set in color fixing and give additional landfall triggers.

The set features three new Planeswalkers in Sorin Markov, Chandra Ablaze and Nissa Revane and a new subtype for Instant called "Trap". Trap cards have alternate costs if specific events happen, like an opponent putting two creatures onto the battlefield in the same turn.[25] There are also cards representing small Quests. These are enchantments that gain Quest counters in specific events. After building up counters on them they yield rewards.

The keyword Kicker returns.[26] It also features the new keyword Intimidate which functions like and replaces fear as it makes a creature with intimidate unblockable except for artifact creatures and creatures that share a color with the intimidating creature.

Another new mechanic is centered around the new creature type Ally.[27][28][29] A group of creatures with that type have abilities that trigger upon them or another Ally entering play and are either dependent on or beneficial to Allies in play the same player controls.

Bloodied is a vampires theme in the set, where the creature will be boosted if the opponent is at 10 life or below, thematically generating the concept of a hunter encouraged by wounded prey.

Zendikar has one mega matched pair with future set Worldwake.

The following cards have been reprinted from previous sets and included in Zendikar: